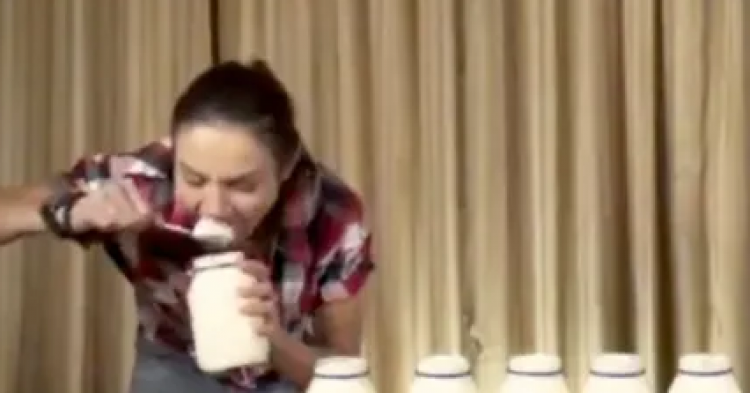 Everyone likes to have someone cheer for them. Whether you’re into sports or academia, it feels good to be recognized for a job well done. That’s why one woman decided to do something utterly strange because she wanted to get credit from a bunch of people in a crowd. Michelle “Cardboard Shell” Lesco is a speed eater who set out to win the accolades of the Guinness Book of World Records by consuming more mayonnaise than any other human being in a span of just three minutes.

Although Lesco is a petite woman who stands at just five feet four inches tall, she can eat a whole lot of food. She can consume more food than you would think possible for a woman with a small frame like her. However, she continues to manage to surprise her audiences everywhere she goes because she manages to eat way more food than seems right – or healthy.

Even if you like mayo, you are probably going to find Lesco’s speed-eating video a bit disconcerting. She manages to consume a whopping three and a half jars of mayo in just three minutes, which amounts to about 86.35 ounces of the white stuff down the hatch.

In addition to her big win with the mayo eating contest, she also holds a few other speed eating records. For example, Lesco consumed a hot dog in less than twenty-two seconds without using her hands to help aid the process. That is much harder to do than one might think. And she also holds the time for the fastest eating of a bowl of pasta, which she consumed in less than twenty-seven seconds.

Lesco has not been a professional eater for her entire career. She actually first got started with speed eating when she joined her friends in a friendly competition. Although her friends dropped out before the thing got underway, Lesco refused to quit and fell in love with the speed-eating world.

The challenge that Lesco and her male friends were going to do together involved the consumption of twelve patties, twelve slices of cheese, and a tomato. Although the men gave up before they even got started, Lesco was braver than all her friends and consumed the food in a very fast amount of time.

Ever since her friends chickened out and she was forced to do the burger challenge solo, she has fallen in love with eating competitions. And now that she holds the Guinness Book of World Records record for eating the most mayo in just three minutes, she will forever be in the history books for completing that challenge. It doesn’t seem like Lesco will be giving up on speed eating anytime soon.

In the video below from the official Guinness World Records YouTube channel, you’ll get to see Lesco going for gold in the mayo eating challenge. She sure loves her fast food.