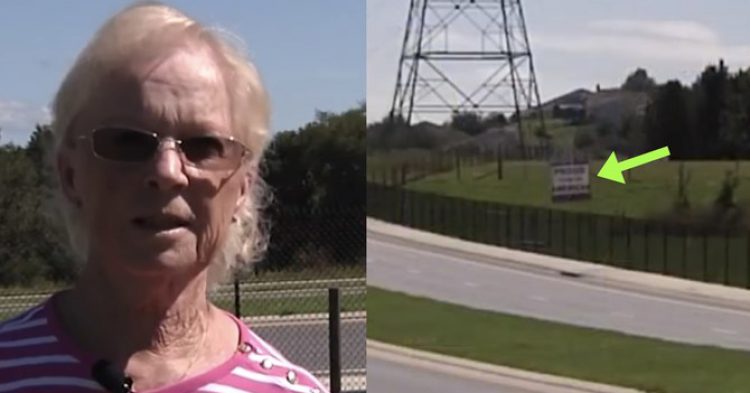 When an elderly woman, 72-year-old Elaine Simmons, decided to express her freedom of speech, she installed a sign on her property that declared her allegiance to America. Besides saying how she was “proud to be an American,” Simmons also asked people passing along the road to “toot for Trump.” After the sign had been on the piece of property for a year along North Hancock Road in Minneola, someone filed a complaint that eventually got to someone with the power to get Simmons to pull down her sign.

Over the previous year, Simmons recalled hundreds of people tooting for Trump. However, that was not the entirety of the sign. She also included an addendum to her original sign that said, “We stand for the national anthem.”

Because the NFL protests were conducted to raise awareness of police brutality and racial injustice against people of color, the reference to the national anthem in Simmons’s sign rubbed people the wrong way.

Simmons added the part of the sign after she watched a child, age eight, kneel during the playing of the national anthem during a football game.

“That flipped me out — that’s not right,” she said. “So I went down to the shop, bought myself a 6-foot board and added ‘We stand for the national anthem'” to the Trump sign. “You’ve got other ways to protest, and that’s to sit down and write a letter to your congressman,” she said. “If you want to be in this country, you have to do it [stand for the national anthem] … If you don’t like it, get a one-way ticket out of here.”

But this was not the final time Simmons had to deal with the troublemakers. She received an official notice to remove the sign from her property within fourteen days or face the repercussions.

Simmons lives on a very populated spot near a lake. Signs need to be formally approved by the homeowner’s association, which she failed to comply with, and “temporary” signs, like hers supporting the president, were only supposed to be up for 90 days. Her signs were up for a lot longer than that.

Simmons is giving up the fight. She’s not loaded with cash to fight the battle in court against her homeowner’s association.

“I’m going to lay low,” she said. “I don’t have the resources to fight this.” She also believes that her addiction to the sign was what prompted the complaints from the locals.

Because Simmons’s pro-Trump sign violated the county codes, county code enforcement ordered her to take down the sign or face a fine. She removed the sign without a fight.