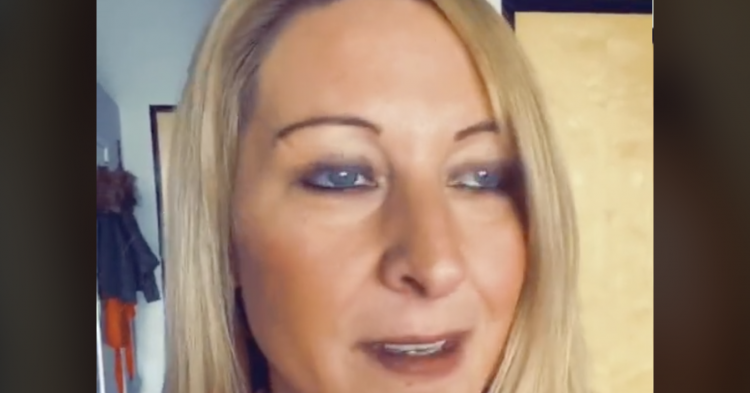 Another angry woman has turned to TikTok to explain how she caught her cheating husband. A user named Tylar Paige uploaded a video to the Chinese-created social media platform explaining how she was browsing Facebook when she spotted an image of her husband that was suspicious. The image featured her husband “with a bunch of girls” during a visit to a nightclub.

The image was not on her husband’s Facebook profile. Instead, she found it on the venue’s page. The picture had been snapped by a professional photographer who was doing work for the nightclub to help promote it.

Paige captioned her video with, “I’d love for this sound to go viral because he will know he’s the only idiot that would tell such a whopper!!!” She also included a few hashtags, including “cheater” and “ex-husband.” She also explained in her caption that the professional photographer “photoshopped his wedding ring off” so he would not appear to be a married man in the nightclub photo.

“So I saw photos of my husband on Facebook, and he’s at a nightclub with a bunch of girls, and he’s not wearing his wedding ring. So I asked him about it.”

Paige was brave to confront her husband about the incident. However, he tells her something she never expected to hear.

Other TikTok users flooded the video with comments. Since being uploaded, the content has gone viral with more than 317,000 likes and 1,800 comments. The video has also been shared nearly five thousand times since it was uploaded.

“I’m sure they Photoshopped him there, too.”

“Girl, you (are) not divorced. He’s just Photoshopped out of your life!”

“Why get married if you are just going to cheat? I don’t get it.”

“Oh, my ex-husband’s ring fell off in his Instagram stories from work, but somehow he found it and put it back on every day before he walked in the door.”

“My ex-husband came home with a hickey. He said he fell and hit his neck on the toilet. Lol.”

“My ex was on a dating site. His excuse was it was an old profile, and dating sites make the accounts of how people look active to get more people (to pay for the service and join).”

“The lies that guys think will be believable,” wrote one user.

“I had an ex tell me I went through his timeline on Google. It shows where you (have) been, and he said Google was lying.”

“He must be an important person for the club to choose him to Photoshop.”

Most comments shared in the TikTok video were in support of Paige for standing up to her cheating husband. However, one anonymous user trolled her regarding her criticism of the cheater.

“It’s pretty easy to see why he’s out looking for other women.”

However, one person said it clearly.

“Ridiculous! Why don’t they ever break up with someone before all the lies? Ahh, because they want the best of both worlds. You go, girl!”

I’d love for this sound to go viral because he will know he’s the only idiot that would tell such a whopper!!! #fyp #liar #cheater #exhusband

♬ They photoshopped his wedding ring off - Ty Paige