Waitress Shares “Controversial” Tip She Got From A Customer 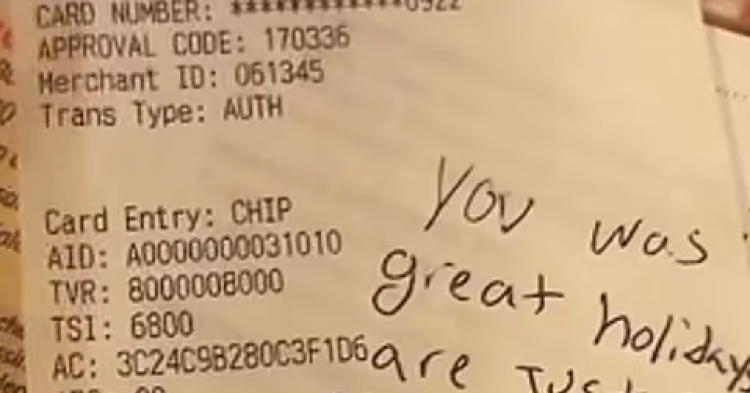 A server at an Applebee’s location in Staten Island, New York, was given the short end of the stick when a customer provided just a nine percent tip along with an explanation for why they weren’t able to give more. According to a note left on the receipt, circumstances “are rough right now,” and they would not be able to give more than $6.55 on a $73.45 bill for the food and service they received on December 13 2021.

The server was shocked by the low tip and was even more upset when they saw that the customer had left a note explaining why they weren’t able to give more money for the service they received. “You was great. Holidays are just rough right now.” 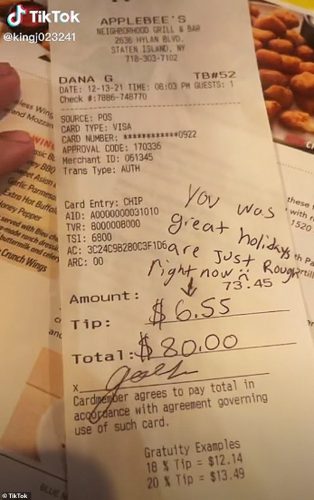 After the server received the poor tip, they took to TikTok to share a video revealing the tip and the note to other social media users. The video sparked a debate about whether or not customers should tip their servers – or if restaurants should simply start paying their workers a livable wage, so the waiters and waitresses do not have to rely on the generosity of strangers to make ends meet.

The TikTok video has since amassed more than one million views and thousands of comments from people across the country. The following are some thoughts from people who use the Chinese-created social media platform.

A woman who identifies herself as Ashley Jennelle Meaney wrote, “I read this on Google, and I instantly came here to say, no one owes you anything, except your employer. You’re paid to do your job, and people pay for.”

“We pay the business who pays the employees. We shouldn’t have to pay both. Tipping isn’t mandatory or included in prices.”

“I think that family enjoyed a nice dinner out and still tipped. They didn’t owe anyone that explanation. Y’all be mad at the wrong people.”

“Tips are not mandatory. They left a note. Be understanding. You chose this line of work. Roll with the ups and downs with waitressing. That’s life.”

“This makes me really not want to go to Applebee’s. It’s a low tip, but it’s still a tip. Calling out customers like this is wrong.”

“Y’all doing too much in the comments. Some people save up for weeks to take the family out for an $80 meal. At least they left her something.”

“Ban tipping. Make businesses pay their employees. Why do customers have to pay both the business and the employee?”

“Tips are voluntary, not mandatory. People know the job they sign up for doesn’t guarantee tips. What a sense of entitlement.”

“As someone who used to be a waiter, I’d be perfectly happy with that tip just because the food is a tad more expensive. Did you really do that much more?”

“The nerves of some of y’all. Gatekeeping taking your family out to dinner for the financially blessed. What type of BS is ‘stay home if you’re broke.’”

“Don’t blame the tipper. Blame the establishment. These people shouldn’t have to rely on tips to barely make ends meet.”