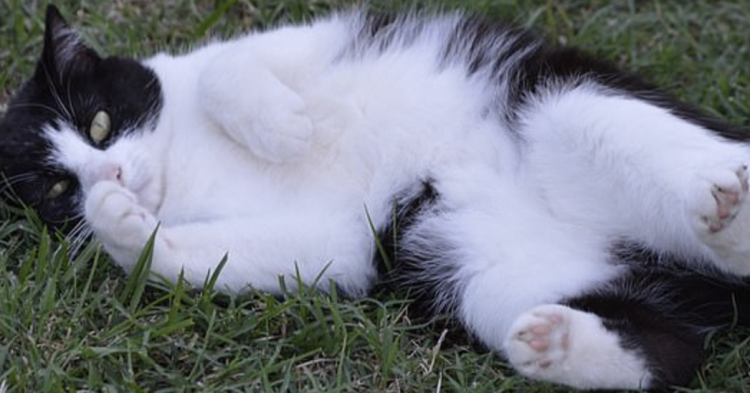 Tuxedo, the cat, was a famous feline from Brooklyn, New York. But on January 13, 2021, Tuxedo was mauled to death by two attack dogs after their owners chased Tuxedo out of a tree and sicced the dogs on the cat. The dog owners used a stick to knock Tuxedo from his hiding place in the tree before urging the dogs to attack and kill the cat in a bloodbath.

Now, an online petition has been started that urges the New York Police Department to investigate the death of the cat. The 20,000 people who have signed the petition so far are from people from eighty different countries who all believe that Tuxedo deserves justice after his violent death. 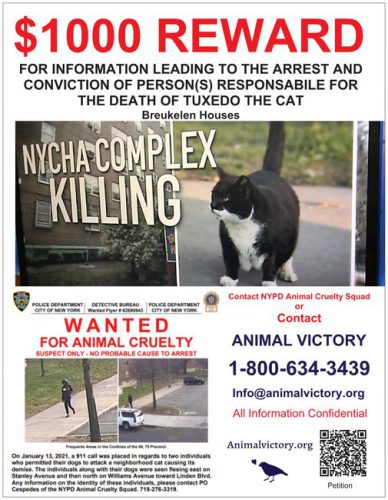 Tuxedo was a beloved cat who was popularly known as the “mayor” of NYCHA’s Breukelen Houses. Nevertheless, the owner of the two pit bulls urged their dogs to brutally kill the cat after knocking the feline from the tree. The cat had been living in the housing complex since 2011 and was part of a “managed feral colony” of cats supervised by Latonya Walker.

“When it first happened, I wanted to die. I couldn’t even get out of the bed for three days,” said Walker, who has fed the cats at the complex for more than a decade.

Now the petition posted on AnimalVictory.org urges people to come to Tuxedo’s defense and help put the dog owners responsible for the cat’s murder behind bars – or at least in legal hot water.

The petition said, “A man who bore witness to Tuxedo’s killing said that the beloved cat briefly got away from the dogs, but the cruel people ensured that he would die a brutal death. Latonya Walker described what Raymond Morales, a witness, told her about the devastating mauling, ‘(Tuxedo) got away and they put a chair there, and a stick and they banged him down the tree. They made him come down the tree so their pit bull could maul him to death. Now what kind of insanity, what kind of evil, sadistic person would come and do that?’ 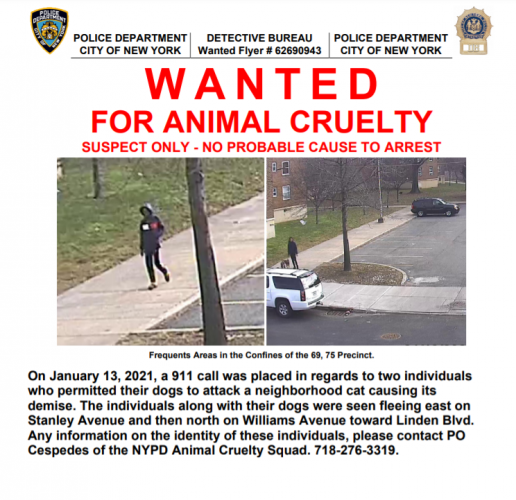 Locals are fearful that if the NYPD does not prosecute the dogs’ owners, they could kill more cats at the housing complex.

Local resident Alexis Cagino told NBC News, “This man weaponized a dog with all intent to kill an animal, which is a crime, and I don’t know why nothing is being done about it. Nobody like that should own a dog (or) should have the right to own an animal.”

The petition posted an update about the case as of February 9, 2021: “A man has been arrested for this sick act of cruelty. The man who allegedly encouraged his dogs to maul and kill Tuxedo is identified as 28-year-old Fulton Gordon. According to the NYPD, Gordan is charged with torturing, injuring, or not feeding an animal, a misdemeanor crime. His arraignment is set for a future date (as yet, unknown). Animal Victory will be pushing for a felony charge.”

What do you think about this horrible crime?