This Trump Conspiracy Theory Has Everyone Scratching Their Heads 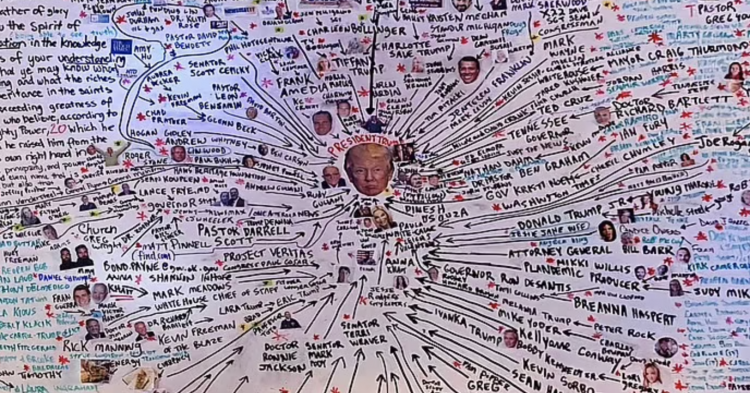 MyPillow C.E.O. Mike Lindell has teamed up with pardoned former Trump National Security Advisor Michael Flynn to show off their “Path to Trump” conspiracy theory that they’ve devised. The creators of the scheme have put it up on a large whiteboard, which features a cutout photo of Trump at the center with various other political and religious leaders and their tenuous connections to the former president.

The image shows dozens of names with arrows all pointing toward Trump’s face at the center of the hand-drawn diagram. There is someone in the background who has shared commentary on the conspiracy theory. 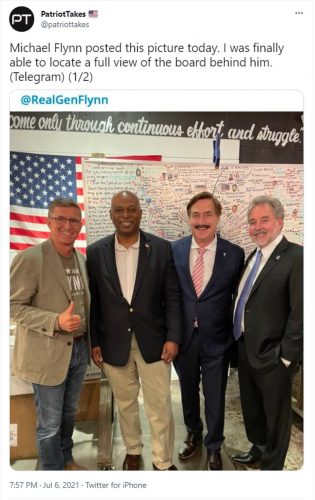 “This is the path to Trump – the trail to Trump,” said an unidentified man in an April video about the whiteboard, according to Daily Mail. “We’re trying to get connected. Reach the man.”

In the image of Lindell and Flynn, both men share large grins as they stand in front of the whiteboard. Lindell continues to advocate for Trump’s false election fraud claims while Flynn was convicted of lying to the F.B.I. regarding his conversations with Russian informants but was pardoned by Trump while he was still in power as president before Biden defeated him in the 2020 election.

Quotes litter the whiteboard and are from people throughout the Trump base, as well as religious quotes from the Bible.

A quote from Revelations 3:7 states: “And to the angel of the church in Philadelphia write; These things saith he that is holy, he that is true, he that hath the key of David, he that openeth, and no man shutteth; and shutteth, and no man openeth.” 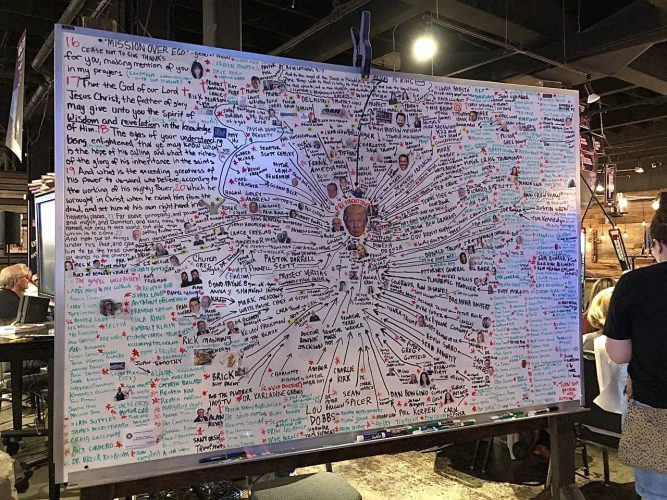 Although Trump loyalists see meaning in the whiteboard, the shared images drew a lot of criticism from people across the political universe.

“My thoughts exactly. If Jesus is King, why the hell is Donald Trump, the president? I personally believe Donald isn’t president because Jesus IS King and couldn’t take it anymore. Proverbs 6:16-19.”

“I looked at this quickly and thought it was Stalin. Then I realized it was the pillow guy. I’m not sure which would be more strange.”

“This looks like something you would see on a crime show once they find the home of the serial killer or stalker.”

“Well, you see Jesus has a really long ding dong, and he pees on T.F.G.’s head (I believe that British spy had that part right) and then BINGO… Dan Boningo turns into Ivanka because she’s her dad’s fever dream, so they get to ‘do it’ if you get my meaning and all this happens in church.”

Some people wrote about how the whiteboard reminded them of the Dr. Bronner’s magic soaps product packaging, which is filled with so many words in tiny font.

“Doc Bronner was a mentally ill chemist who was desperately trying to communicate to people that we are all in this together and we all need to tolerate and try to love each other; His soap rants are one of the few truly good pure things out there.”

What do you think about this path to the Trump conspiracy?