This Deer Died Of Starvation, But Doctors Found 9lbs Of This In Its Stomach 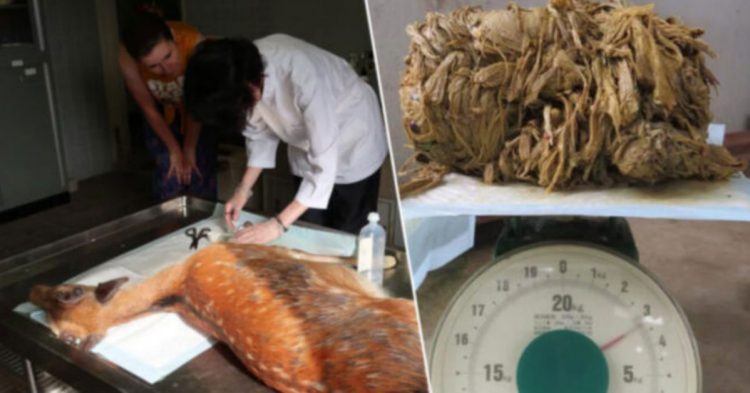 Ever since life walked on planet Earth, it has needed to eat something else to survive. Life consumes life. It’s a cycle that never quits. The lion eats the antelope, which eats the grass. Food, at its most basic source, has come from something that has living. And when animals – or humans – consume too much of something that has never been alive, it kills them, plain and simple.

A deer was found to have died of starvation. It was not a common problem that experts in the area had encountered. There seemed to be plenty of food for the deer to consume. Why did this one die from lack of nutrition?

The deer lived at Nara park, which is visited by more than one million people per year. Nara Park is located in Japan in the city of Nara. It’s a beautiful expanse of nature and is also famous for its population of deer.

But on May 24, one deer stood out from the rest. A female deer died. While this might seem like just the way things are some time in a park loaded with a massive deer population, the way this deer died was exceptionally unique. It died of starvation – when there should have been abundant food in Nara Park for all the deer to consume to their heart’s content.

Many people consider the deer at Nara Park sacred. The Shinto religion in the area honors the animals. They don’t worship them, but they treat them with respect for living animals should be treated with. That means it’s not the locals who are killing these precious deer – but the ignorant tourists who are destroying the peaceful way of life for these animals.

Tourists don’t bring their guns and crossbows into Nara Park. That is not allowed. Instead, they bring their garbage – dumping tons of it per year. Because this artificial plastic gets into the deer’s diet, the animals are slowly killed in a gruesome way. It’s pollution that is killing the sacred deer at Nara Park – not hunting or violence. The plastic is strangling the life out of these creatures by making it impossible for them to get better nutrition.

That’s what veterinarians at the park realized when they found this dead 17-year-old female deer. The deer had been watched by the experts for some time, and she continued to look more and more malnourished. What was happening to her was not something that could be monitored from the outside. They only learned the truth when they performed an autopsy on the dead deer and found nine pounds of plastic waste, blocking the animal’s gastrointestinal tract.

Now the park encourages visitors to use eco-friendly food bags that will not be as dangerous to the animals.