Teen Girl Flips Out On Plane When Grandma Takes Her Phone Away : AWM 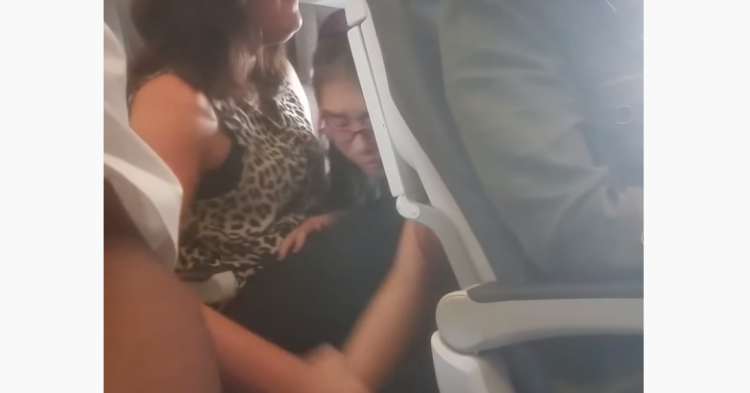 If teenagers love one thing, it is their phone. Young people cannot seem to be away from their phones for very long without falling into utter despair. While many young people fret over being disconnect and soon move on and focus on something else, one teen girl fell into a state of turmoil when her grandmother forbid her from using the phone on an airplane – and the entire incident, which is certainly bizarre, was captured and uploaded to YouTube where it has since gone viral.

The person who uploaded the video wrote a description of the incident. The clip is very alarming because the girl sounds utterly distraught. You’d think that something far worse than her having her phone taken away from her has happened. She’s pleading for direct intervention from God to help her get her hands back on her phone. And the person wrote the following, describing what happened on the flight to Washington, D.C.

“On my flight to DC, this kid goes ape shit when grandma refuses to give her phone back. Not sure what was wrong with her, if anything,  but what I am sure of is she needs her *ss whooped.”

Footage shows the girl throwing a fit because she doesn’t have her phone. At one point, the girl lunges over her grandmother and grabs the bag to get the phone back into her possession. But the older woman tries to talk sense into the girl. But it just doesn’t get into her mind. She is so focused on getting her phone back that she’s willing to do whatever it takes to make the become her reality.

Before long, other passengers join the fight. They start pulling the bag away from the distraught girl and try to calm her down as she wails and pleas for help. But it doesn’t help. The girl shouts louder than before.

But that only makes the problem worse. Once the bag with her phone in it has been taken away from her, the girl struggles against her grandmother as if her life depends on it. She wriggles and fights and does everything in her power to get out of the airline seat and into the aisleway.

She eventually gets out of her grandmother’s stranglehold and stands up in the aisle. She shouts at everyone on the plane, who was staring at her, calling them all stupid. Then she dashes toward the front of the plane as the flight attendant warns the passengers that they are preparing for arrival.

Viewers of the footage are shocked. Some people worry the girl might have a disability.

“I think she might actually have autism. I’m not saying that as an insult.”

Other people believed that this girl was simply spoiled rotten.

“This is what happens when you give them phones when they’re in kindergarten.”

“Too many damn choices, timeouts, and trophies for all and not enough consequences for your actions! She needs a swift kick in the ass, put back in her seat and told to shut the hell up and then make her apologize to everybody on that plane!”