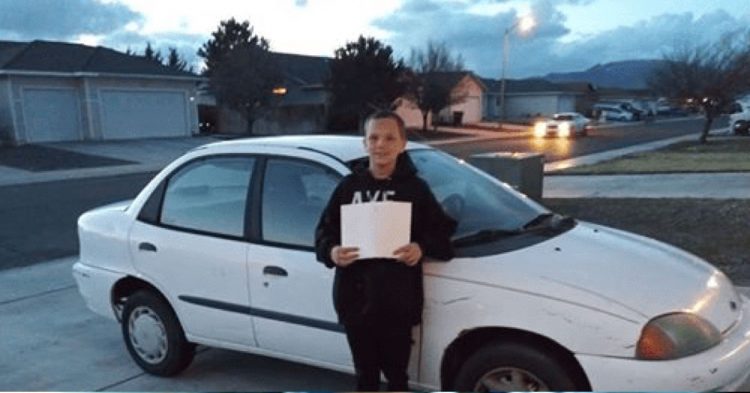 Krystal Preston knows what it means to struggle. The single mother was abandoned by the father of her child. But she refused to let that stop her from giving her son a good life. But to do that, she had to sacrifice everything for herself – including the ownership of a car. Nevertheless, Preston was able to give her son lots of great toys and games like a new Xbox console and other items to help him keep up with the Joneses.

However, the lack of a car was debilitating for the family. Preston had her 13-year-old son, William, and his two younger siblings – and their three dogs. Every morning when it was time to pack up and head out for the day – this was back in March 2019 – Preston had to fight. With no car, every day was a struggle to get going.

William, 13, saw that his mother struggled. He wanted to do everything he could to make life easier for her – but as a teenage boy, he was too young to get a real job. Despite their situation, he had everything he wanted. While he loved his possession, and they made him look very cool to the other children in his class at school, he hated seeing his mother barely making it through the day.

Every evening, Preston would come home exhausted. But even if she was tired to the bone, her responsibilities were not over. With three children, three dogs, and no one to help her, she had to do it all herself – or risk inflicting suffering on her children through lack of resources.

That’s when it hit him. William realized that he did not need a “real” job to make money. With so many possessions, he could try trading or bartering them for cash or other items. He set out to make his mother’s life easier.

Preston first noticed a change in William when he began asking lots of questions about cars. He even began researching car parts and how to install them. But the busy mom did not think too much about her son’s new interest. He was a child and interested in a lot of things. However, looking back, she could see that William was up to something.

Unbeknownst to his mother, William was scouring YouTube for clips of other children who helped their parents. He connected to the videos of children like him who managed to surprise their overworked mothers with a new car. He turned to Facebook next and found a woman selling her 1999 Chevrolet Metro at a rock-bottom price.

William did not have cash on hand, so he asked the seller if she would trade her car for his pristine Xbox. She agreed to do it so long as he gave her some extra cash. William agreed and then started collecting money from neighbors in exchange for yard work.

In the video below, you’ll see the moment when William surprises his overworked single mother with the car.

Check out the heartwarming video from CBS News below.