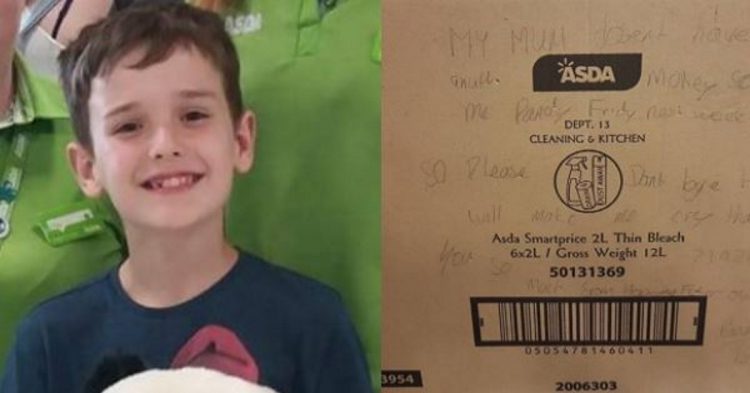 Employees at a supermarket in Britain went above and beyond for a young customer who fell in love with a toy in the store but whose mother told him they couldn’t buy it. As most parents know, taking little ones to the store can oftentimes result in requests for toys, books, or snack foods and sometimes parents will buy the requested item.

Other times, it’s not in the budget or is best left for a gift for a special occasion. 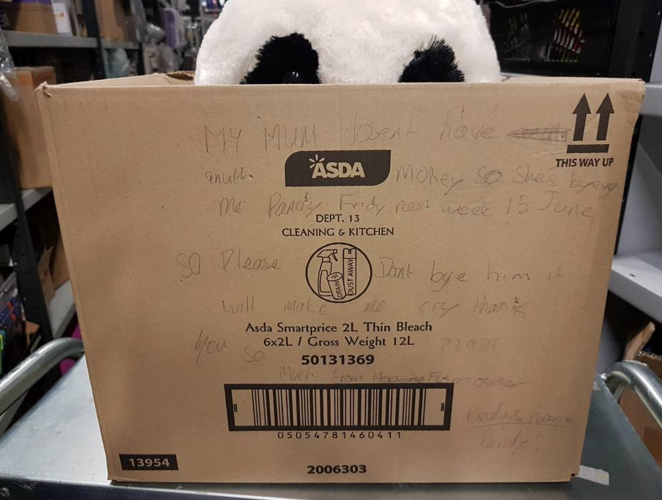 In this case, Debbie Phillips took her 10-year-old son Leon to the nearby Asda store, where he spotted a toy he liked called a “Lovable Huggable Panda.” He hoped to take the stuffed animal home, but his mom said they would have to wait until the next payday.

Leon had an idea that he believed might keep someone else from buying the toy, who he named “Pandy,” so that it would still be there when they returned to buy it.

He placed Pandy in an empty cardboard box and left it on a shelf — with a note on the outside of the box.

Leon wrote: “My mum doesnt have anuff money, so she’s byeng  me Pandy next week 15 June. So please don’t bye him it will make me cry — thank you so much from his hopeful future owner. Pandas name is Pandy.” 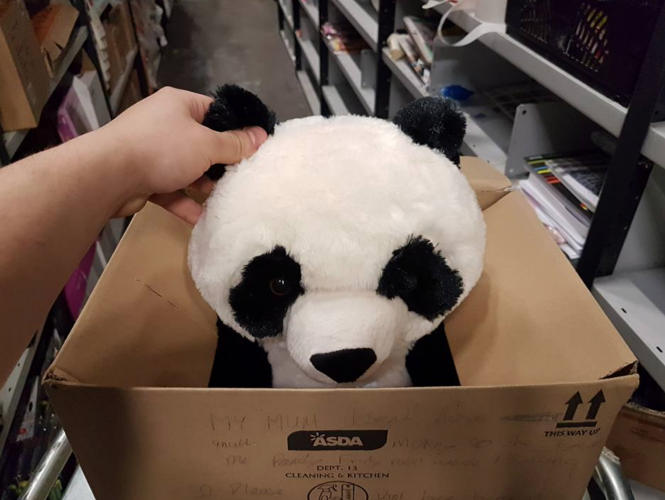 The heartfelt message wasn’t lost on the staff at the Asda supermarket, who spotted the cardboard box and read Leon’s note. They decided to help the kid out in a big way, contributing money so they could buy the toy panda for Leon.

The store posted photos of the box and panda on social media in hopes of locating the boy who left the note.

Debbie spotted the story on Facebook and was overwhelmed, noting: “A few days later I was flicking through Facebook — I hadn’t realized until then what Leon had written — he’d really poured his heart and soul into his message.”

She explained how much her son had wanted the panda at the time, noting: “I told him we would come back next week after I’d been paid and get it as long as he was a good boy. He kept saying he didn’t want anyone to buy it so he found a cardboard box, got a pencil out of his pocket and wrote a note on the box. He then put the panda in the box and put it back on the shelf. I didn’t actually see what he’d written at that time.” 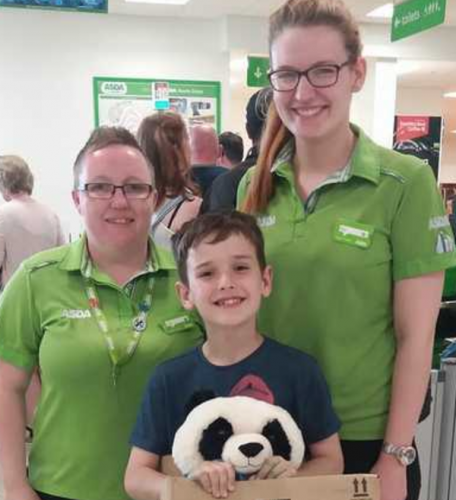 She returned to the store with Leon, where the employees presented the boy with the panda.

Debbie said that the gesture had a huge impact on her son, explaining: “As he was walking out he said to me ‘This is the best day of my life’.  It meant the world to him — thank you so much Asda!”

This sweet act of giving also touched Leon’s family in a huge way as they were still recovering from a recent loss. Debbie explained: “In January my son Oliver was born prematurely and passed away four days later so it’s been a really tough, difficult time for all of the family, especially the children who were so involved in the lead-up to the birth.”