She Calls It The “Greatest Food Combination Of All Time,” But Nobody Agrees 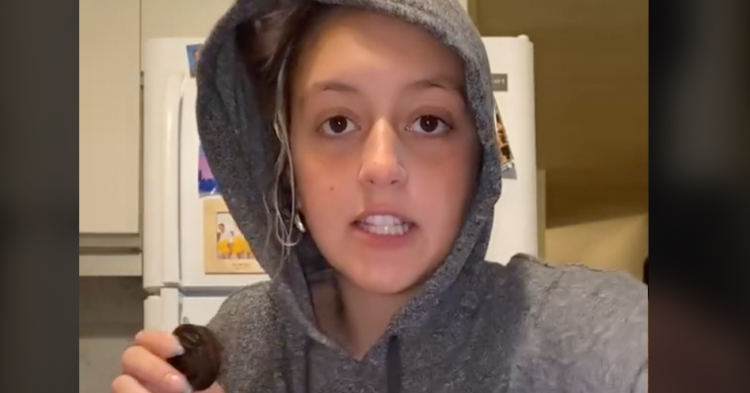 “Coming at you guys with the greatest food combination of all time: Oreos and sour cream,” one TikTok user declared in a video that has gone viral with hundreds of thousands of views. The user of the Chinese-created social media platform has been identified as Maddie Goetz. She has created dozens of popular videos on the channel, but few have proven as controversial as the one in which she claims to have discovered the greatest food combination of all time by slathering Oreo cookies with sour cream to create a sweet and savory dessert that left the majority of her fans utterly disgusted.

Goetz exclaimed, “It’s so good. Don’t knock it until you try it.”

In the video, Goetz picks up a holiday Oreo cookie and a cup of Daisy Sour Cream. She peels open the Oreo cookie, which has red holiday filling. Then she prepares the dessert for her “greatest food combination” by slathering the sour cream all over the dessert cookie.

After splitting open the cookie, Goetz scrapes off the red cream and eats it. This helps her prepare the cookie for the sour cream. Then she puts the cookie pieces back together so she can scoop up some of the sour cream directly from the cup.

“Don’t knock it till you try it,” she tells the camera. She eats it with a look of utter delight on her face, devouring it in a single bite.

According to Yahoo Life, there were a lot of comments left on the video by people from across the world. Many people were disturbed by the food combination and urged Goetz to rethink what she puts in her body.

“Take a pregnancy test,” someone suggested because she had a very strange food craving.

“I cannot defend this one, bestie,” another joked.

“Tastes kind of like Oreo cheesecake. She’s not wrong about it being good,” a user commented.

“This affected my credit score,” one person joked.

“Maybe cream cheese. Not that.”

“Blink twice if you’re in trouble,” one person added.

After the video went viral, Maddie Goetz appeared on The Ellen DeGeneres Show to defend her food combination.

“It sounds disgusting. I know. But it’s really, really good. Trust me,” she said on the show, according to Yahoo Life.

DeGeneres was hesitant about the food combination but took a bite anyway.

“It tastes like cheesecake! It does taste good. I don’t know that it should be called the greatest thing of all time because you can put sour cream on lots of things, but this works for sure,” DeGeneres said after trying it according to Yahoo Life.

Goetz added, “I think it’s delicious, and I like that you can get a sweet and savory thing in one bite. It’s amazing to me that people haven’t thought of this before because we eat Oreos with dip all the time! Why not do sour cream? People love sour cream.”

Since the video went viral, Maddie Goetz has been trying to convince people that her food combination is actually good. She even started a Twitter hashtag #sourcreamandoreos in order to try and get people to give it a try.

While a lot of people are still disgusted by the idea of slathering sour cream on an Oreo, there are some people who have decided to give it a try and have found that it is actually pretty good.

What do you think? Is Maddie Goetz’s food combination the greatest thing of all time, or is she just crazy? Let us know in the comments!

“Are you talking to us?” Hahha