Pizza Shop Owner Is Pressured To Take Down His “Offensive” Sign 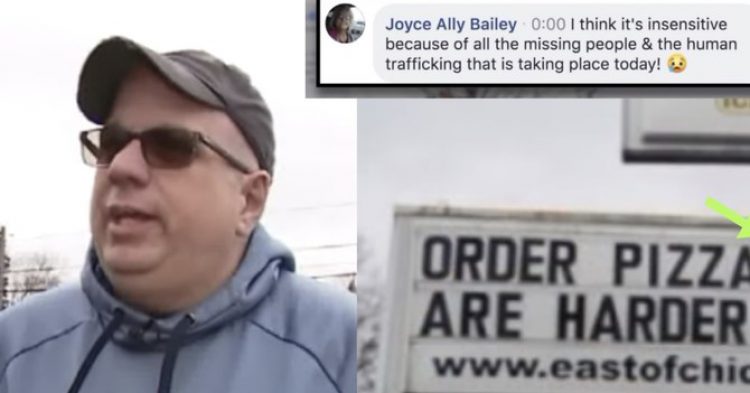 After slaving away at the East of Chicago Pizza chain since 1995 for nearly two decades, Jeremy Clemetson got all his ducks in a row to open up his own branch in Barberton, Ohio. He’s been operating his East of Chicago Pizza shop for fourteen years and loves the work that he does. Because he wants to drive more business into his shop, he started advertising outdoors to attract commuters and raise awareness about the pizza that he makes.

However, Clemetson decided to use a tone in his advertisements that sparked a lot of controversies. Although he found it to be funny, people in the community found it rude and offensive. But some people don’t think they’re really that bad.

Some of the slogans that he used for his advertisements included, “Now Hiring, Must Show Up,” “If it’s not there in thirty minutes, move closer,” “Free Box with Every Pizza,” Tammy, you need to show up to work,” and “Our Deep Dish Pizza is as big as a pothole.”

The one about Tammy was a dig after she took extended medical leave. Clemetson admits that he hardly even comes up with the ideas himself. He just lifts them from other creative people who have posted similar things on the internet. He’s just bold enough to put them in an advertisement for his business.

“I scour the internet for different signs that people had. Sometimes I use them, and sometimes I reinvent my own.”

Most of the time, people find his slogans to be fun. He has said that customers have mentioned them as the primary reason they’re willing to try his pizza shop. If the advertising is funny, the customer thinks, the pizza must be okay.

There was one slogan that he desperately wanted to steal. However, it was already being used by a large motel chain. The slogan was a dig at obese people, who are some of Clemetson’s best clientele. The slogan he wanted said, “Fat people are harder to kidnap.” The famous slogan has also been printed on t-shirts and spread across the internet. By no means did Clemetson invent the line, but he decided he was going to steal it and use it on a billboard along with a picture of pepperoni pizza.

“I discussed the sign with a few people, and everyone thought it was funny. So I threw it up on our front sign, and no one said anything.”

Before long, people were filing complaints with the pizza chain’s corporate headquarters.

The person who filed the complaint sent the same email to Fox 8, calling it “rude.”

They felt that not only was it offensive to fat people. It was also done in poor taste as it was put up during January, which is National Human Trafficking Month.

Clemetson has since apologized for overlooking the seriousness of the kidnapping reference.

Do you think the sign is funny or offensive?