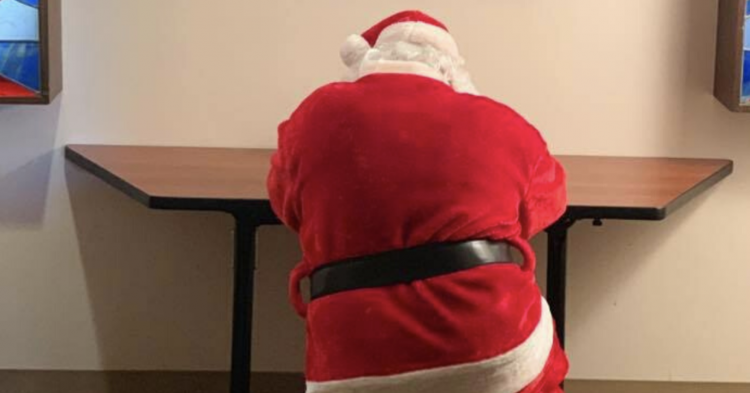 Although Christmas is at its core a Christian holiday, American culture has transformed it into something that reaches beyond the boundaries of religion. Even for those who do not worship Jesus Christ, Christmas can be a time of celebration, of joy, of love, and of gathering with the family. But while some people do not celebrate the religious aspect of Christmas (the fact that it is the day that marks the birth of Jesus), there’s a reason so many people go around saying, “Jesus is the reason for the season.”

One woman named Mariana Whitley Tumlinson works at a children’s hospital. Although she spends many of her days at the facility caring for sick kids, one memory will forever stick in her mind. It occurred around Christmastime when she happened to catch Santa Claus doing something uncommon. Tumlinson snapped a photo of Santa Claus after he entered the hospital’s chapel so he could send a prayer to Jesus Christ for the good health of the children he had visited that very day. 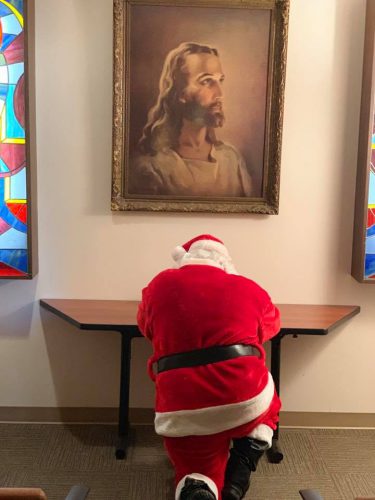 The moment struck Tumlinson as being very important. She hoped that it would spread Christmas joy to more people during a challenging period in American history. With so many people biting each other’s heads off and arguing, she wanted the picture of Santa Claus kneeling in prayer to Jesus Christ to be a source of hope for all people – whether they were Christian or not.

“I keep getting choked up with this photo. Today, after Santa visited our patients and was on his way out, he noticed our Chapel. He asked if he could go in and pray for the kids he just visited. I, of course, said yes. I didn’t walk In with him right away, but when I did, I was so moved by this image I had to capture it. What a great reminder of the reason for the season.”

It touched the hospital worker to know that Santa Claus genuinely wanted the children to feel better. It’s easy enough to throw on a Santa outfit and visit sick kids for the paycheck, but this Santa Claus really wanted the kids to feel better. Instead of just bringing joy into their lives and letting them sit on his lap and tell him what they wanted for Christmas, he went above and beyond and entered the hospital’s chapel to send prayers out for every child he met with that day.

Tumlinson serves as the Director of Community and Public Relations at Valley Regional Medical Center in Brownsville, Texas, which is on the border of Mexico.

Santa Claus may be a pagan figure. Saint Nicholas was an early Christian saint who lends many of his admirable qualities to the modern Santa Claus. Because Saint Nick has ties to this early Christian leader, it makes sense that he may want to kneel and pray to Jesus Christ for the health and happiness of the children he visited that day.

This image was shared on Facebook during Christmas time in 2018. It still holds so much power and joy for viewers today.