People Are Boycotting This Restaurant After They Posted This Offensive Sign 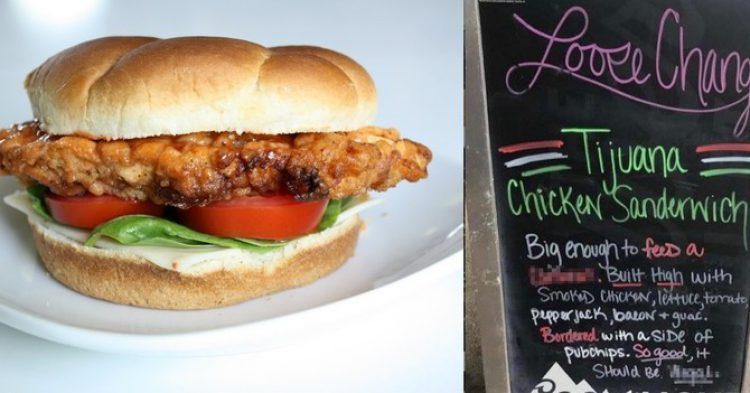 When a restaurant decided to promote a chicken sandwich, it put up a sign that has offended a lot of people. Desperate to increase sales, the chicken shop, which calls itself Loose Change, put up a sign for a “Tijuana Chicken Sandwich” that is “big enough to feed a caravan built high with smoked chicken, lettuce, tomato, pepper jack, bacon and guacamole” that is “bordered with a side of pub chips. So good! It should be illegal.”

Because the restaurant used his menu item to make a political statement and poke fun at Trump’s anti-immigration rhetoric and dislike of all things Mexican, the sign has sparked outrage among some customers. Several organizations, including the Clemson Undergraduate Student Government, has given Loose Change negative feedback because of the “offensive” sign that was done in a “very distasteful” manner. 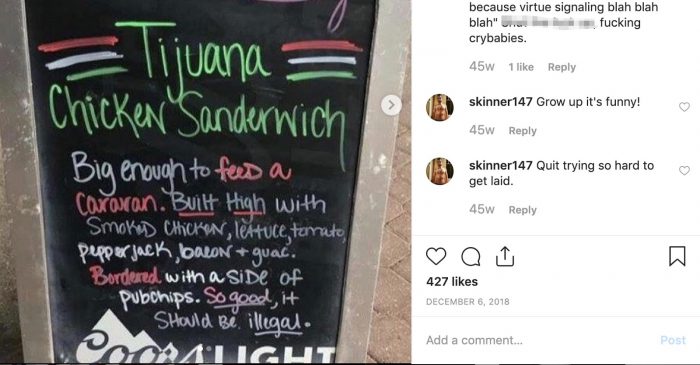 Because Trump has made a lot of comments about his immigration problem, the restaurant tried to piggyback off of Trump’s popularity by putting this item on their menu. While it was a hit with some customers, more people disliked it than liked it despite the fact that the sandwich sounds tasty.

The school released an official statement about the sandwich sign:

“Clemson Undergraduate Student Government denounces the incident that occurred last week with the signposted outside of Loose Change, a restaurant in downtown Clemson,” the student government’s statement read. “The sign was offensive and very distasteful. CUSG stands for the voices of all students, and it is concerning that Loose Change would block the social media accounts of several student organizations after they expressed concerns about the incident. This situation greatly disappoints us, as we will not stand for any voice to be censored.”

Not only did the Clemson Undergraduate Student Union express its disgust for the sign, but fraternities at the university were also fighting back. Lambda Theta Phi released a statement denouncing Loose Change and its advertisement for its Tijuana chicken sandwich.

“As members of the Clemson community and former patrons of your establishment, we are writing to express our disapproval of your tasteless appropriation of humanitarian crises for the sake of generating profits. The caravan consists of people who have fled their homes because many regions in Latin America are experiencing unprecedented levels of violent crime.”

The fraternity found it offensive that the chicken shack would try to use an international crisis as a way to joke itself into the black.

The restaurant realized its mistake and issued an official apology. But then it deleted its apology and blocked its critics on social media.

Because the chicken shack tried to use a humanitarian crisis to sell more fried chicken sandwiches, karma bit back hard.

What do you think about the sign for the Tijuana chicken sandwich?