Over 100 Students Are Offended By A Food Truck, Decide To Walk Out Of Class 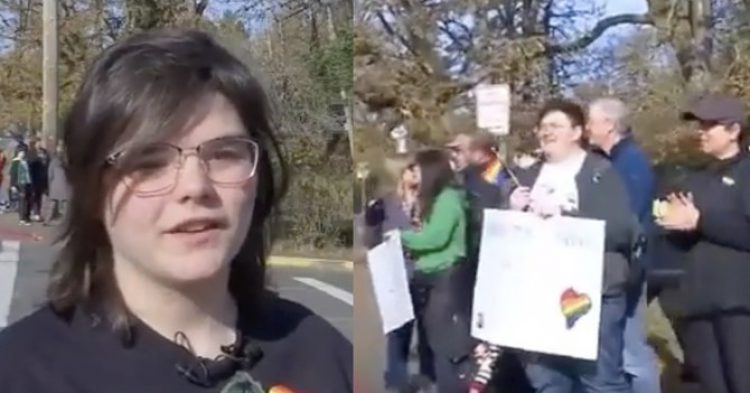 When the administration announced that food trucks would be arriving at the next West Linn High School football game, the students cheered. Getting the opportunity to pick up fresh food during a game was a very exciting thing for these high school students. But they quickly changed the tune once they learned who would be serving them their fried chicken.

When the Chick-fil-A food truck pulled up at the West Linn, Oregon school, a wave of boos erupted from the crowd. The students were outraged that the school administration would hire the anti-LGBTQ company. That’s why more than one hundred students banded together and formed a protest group in support of the LGBTQ community. As a group, they walked out of the home football game and refused to buy any fried chicken from the Chick-fil-A truck as an act of protest.

Chick-fil-A has long been a controversial fast food joint because of its professed Christian values. The fried food place does not open on Sundays to allow its workers the opportunity to practice the Christian sabbath. The company has also famously been vocal about its opposition to same-sex marriage and other equality rights when it comes to people in the LGBTQ community. Although Chick-fil-A has tried to be more moderate in recent years as people criticize them for their views, the students at West Linn High School knew the history of Chick-fil-A and did not want to support the for-profit fast-food company.

The Chick-fil-A food truck was not the only anti-LGBTQ event that scared the students of West Linn. During another event, a transgender student had their car vandalized with the word “queer” written across the vehicle.

With a student population of about 1,800 students, the 100 person protest only featured about five percent of the student body. The rest of the football attendees had their fried chicken and ate it too.

However, the protestors wanted to raise awareness around how the West Linn culture sparks fear in those who identify as part of the LGBTQ community.

Susie Walters represented the group of protestors. She’s a student and spoke with Oregon Public Broadcasting about how she – and others – have been harassed because they speak out in favor of LGBTQ rights.

“I have faced, on school property and in our community, from West Linn students, I’ve faced people yelling slurs at me and calling me names,” Walters said.

The student who had their car vandalized with the hate crime message saw the anti-Chick-fil-A protest as a sign of “student pride.”

The vandalism victim said, “We walked out to show our student pride to show that despite everything we’ve been through, we are still proud of who we are, and we won’t back down, and we won’t make exceptions for anyone.”

What do you think about the student walkout after the Chick-fil-A truck showed up?