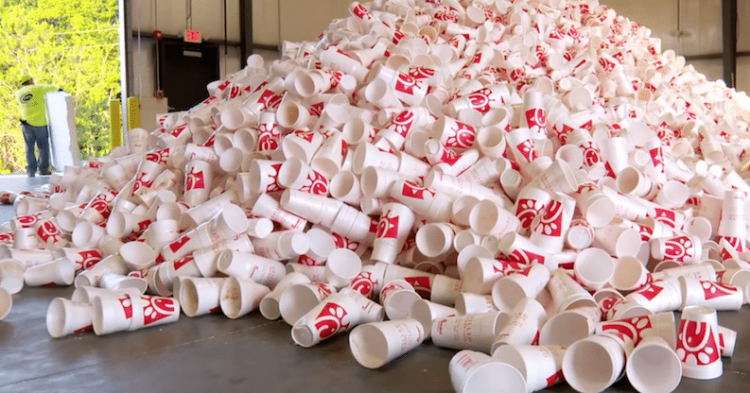 Few companies in the United States are bold enough to operate by religious values. But Chick-fil-A is one of them. The company, which shutters its doors on Sunday in observance of their Christian values, believes that it owes its employees the chance to go to church if they see fit. While Chick-fil-A has been a source of controversy for forcing some values onto employees and denying them certain health care based on religious ideals, the company has an interesting way of reusing their soiled cups that you probably didn’t see coming.

“Customers tell us that they love our foam cups. They keep the drinks cold for hours, but instead of just throwing all these cups into the landfill, Chick-fil-A began a journey as to how to make these cups more useful,” said Sarah Blackmon, the manager of enterprise social responsibility of Chick-fil-A.

Every day Chick-fil-A sells thousands of Styrofoam cups to its customers. People buy the sodas and sweet teas by the gallon sometimes. Although Chick-fil-A loves using Styrofoam because it’s good for their bottom line, the environmental impact from the cups is massive. Chick-fil-A, which is a Christian organization, understands that the environment is God’s creation just as much as humanity is. That’s why the fact that their discarded cups contribute to climate change and other global issues does not go unnoticed by the organization. They’ve come up with an alternative way to use their soiled cups that may put a smile on your face.

Chick-fil-A tasks their employees with sorting through the garbage to collect the dirtied cups. Then they ship bags of these dirty cups to a special recycling facility. The facility, which is state-of-the-art, breaks down the Styrofoam from the cups and mixes it with other materials. Then the new material is morphed into an L-shape, which is then hardened and used as a leg to for park bench. These benches are placed outside of the restaurants throughout the country and in parks in local communities. Other recycling locations also use the Styrofoam product to create writing pens and name badges for employees. The Styrofoam cups get a second life that helps save the environment from the disastrous effect of Styrofoam without adding more volume to America’s landfills.

Because you now know that Chick-fil-A gives a second life to their Styrofoam cups, you can feel better about throwing them into the bin at the restaurant. So long as the Chick-fil-A employees can get their hands on the soiled cups, they can send them to the state-of-the-art recycling facility and give them a second life – and a chance to do some good another time around. It’s much better than just dumping these used cups in the landfill where they’ll take years to break down – or may never break down.

Next time you order a drink at Chick-fil-A, know that the company wants to get their hands on your soiled cup so they can reuse it to make a bench or a nametag for their employees. They want to reduce their environmental impact because God created the environment and the world that we live in.