Nobody Believed Her When She Said She Could Fit 6 Puppies Into This Tiny Bowl : AWM 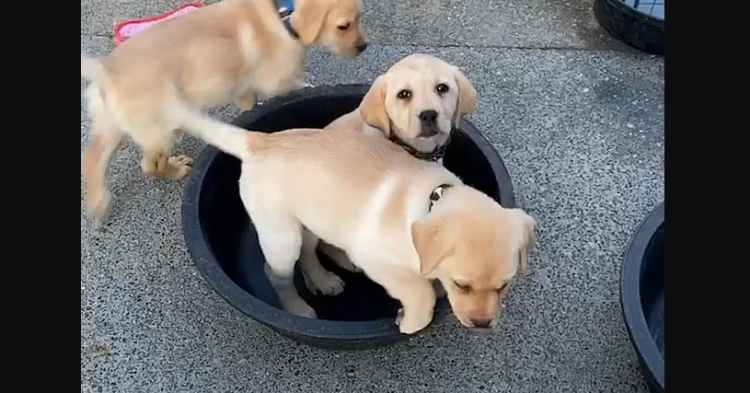 While the world reels from the outbreak of the coronavirus, videos like this one are bringing a much-needed moment of happiness to millions. This simple video shows the moment when a litter of Labrador retriever puppies tries to squeeze into a bowl that is much too small for all six of them. Nevertheless, the breeder captured the moment and uploaded the subsequent video to the internet – only to get a positive response and a lot of people spreading the love around with their friends and family.

As she films the adorable video to prove how many puppies can fit into the small bowl, California breeder Laurie Soloski encourages them, wanting them to go for the record. At the beginning of the video, two puppies fit into the bowl, but soon the others want to join in on all the fun. The siblings don’t like being left out, so they start climbing into the small bowl with the first two, and soon, the space gets very crowded. It is only a matter of time until five puppies fit into the bowl – when the sixth one decides to jump on top and become the cherry on top. 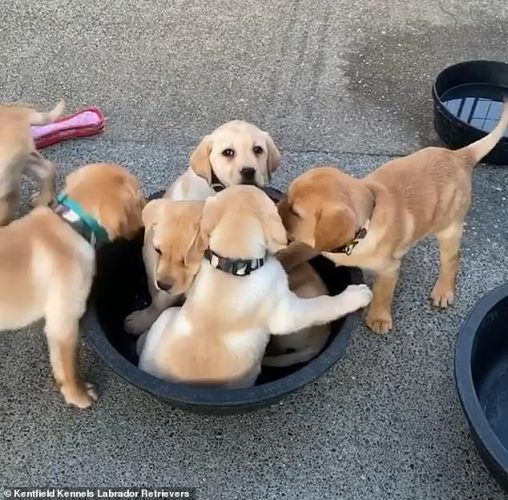 Soloski owns and operates the Kentfield Kennels Labrador Retrievers in Sebastopol, California. The successful breeder is delighted to watch the puppies have so much fun with the bowl. She encourages them throughout the clip because she knows that her customers and fans love viewing content like this online.

“Well, five of you got in,” she is heard saying on the video. “Good puppies.” But when the sixth one comes over and starts examining the opportunity to pile in on top of the rest, the breeder cannot hold back her glee. “Oh, hello, hello. It’s after-dinner nap time.”

The sixth puppy refuses to be left out. It jumps on top of its brothers and sisters and cuddles in among the soft fur of the others. 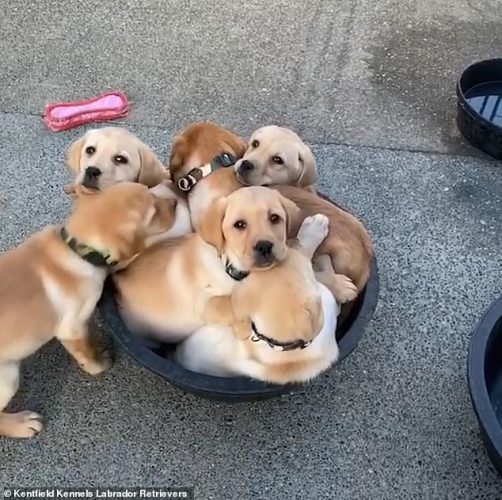 The breeder cheers on the pups, saying, “all of you are in. Six of you! Good puppies.”

Thousands of viewers watched the footage. Many could not hold back their joy at watching the footage and shared comments about the clip. Others were eager to share the love with their families and friends, so they emailed and messaged the video around their networks.

“They’re just darling, and your deadpan commentary was the icing on the cake! Thanks for sharing and bringing a huge smile to my face!” one fan wrote.

Another commented: “Nothing quite as beautiful as a Labrador puppy.” 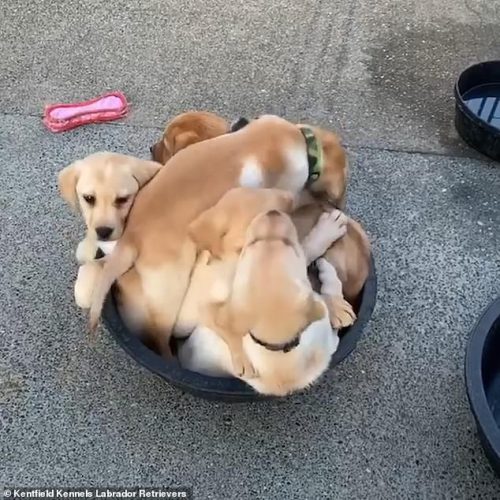 Readers on the Daily Mail also contributed dozens of comments to this adorable story. Here’s what some people had to add:

“Ha-ha, that made me so happy & I felt my face scrunch up into a giant oooooh!”

“Heartwarming video to look at among all the sickness news. What is it about puppies? I look at that video and just get happy. God gave us dogs as a gift.”

“Probably some base instinct that reminds them of the comfort and safety of being in mums womb, the phrase ”cute as a load of Labrador puppies in a bowl”, is now a ‘thing.’”