Neighbors Called Her Crazy For Spending Thousands On Her “Pod,” But Now They’re All Jealous 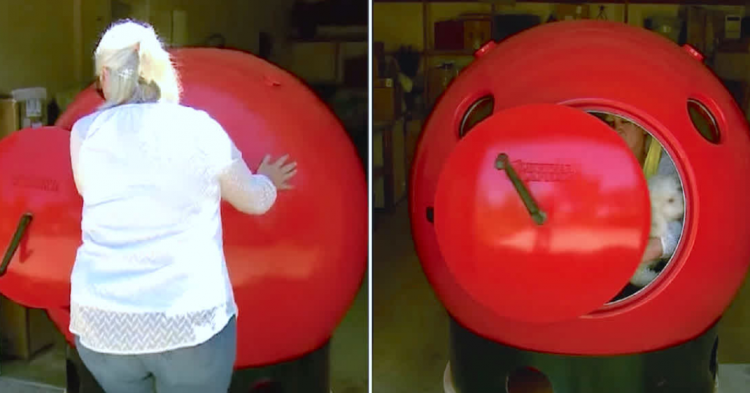 Life on the West Coast of America can be quite beautiful. The Pacific Ocean is gorgeous and offers so many opportunities for fun and recreation. However, there are also major risks to living along the coast of the Pacific, as one Washington woman claims. According to KOIN 6, “If and when a major Cascadia subduction zone earthquake hits off the Northwest coast of Washington, there will be little residents who live there can do except run for the hills to try and take cover from a tsunami.”

Because Jeanne Johnson lives less than a quarter-mile from the ocean, she is always worried that a tsunami could be coming. If a major wave comes crashing toward her home, she would have to evacuate and would have little hope of getting out in time to save her skin. Since she is the beloved owner of her dog, Trixey, she doesn’t want to put herself or her dog at risk of death by drowning.

Jeanne sought out creative solutions to her problems. That’s when she came across something called a tsunami survival capsule. She became the first American to buy one of these life-saving devices for thirteen thousand dollars.

The device weighs about three hundred pounds and is four-and-a-half feet in diameter. The cost of the device is about $13,500. Although her neighbors thought she was crazy for investing in the pod, Jeanne says it was worth every penny. She doesn’t even worry about dying anymore.

The pod cost Jeanne “less than a Harley, more than a golf cart.” And KOIN 6 news reported on her purchase to the amazement of locals in the Washington area.

On YouTube, thousands of people left comments about the tsunami pod purchase.

“Just imagine not being able to reach your pod when the tsunami hits. You would have to take it everywhere with you to be 100% safe.”

“Imagine being so scared of death that you buy a tsunami survival pod but still drive a motorcycle.”

“So you would rather be stuck in a ball under a collapsed house, cars, debris, upside down?”

“If she was that worried about tsunamis, wouldn’t it just make more sense to move to somewhere slightly further away from the coast?”

“For those wondering about oxygen, further research says the capsule has an air tank that’ll last an hour if you’re underwater… that being said, this is still a dumb idea.”

“This feels like a story by The Onion. It will keep her safe for the first half-hour to an hour. After that, either she will be swept out into the open ocean, or she will suffocate via the air-tight compartment.”

Some people disagree with Jeanne’s decision to buy the survival pod.

“I think I’d rather die than cram myself in that thing. Imagine being tossed around for a few days in the ocean before finally being lost at sea or suffocating death while being violently tossed around.”

What do you think about this Washington woman’s tsunami survival capsule purchase?