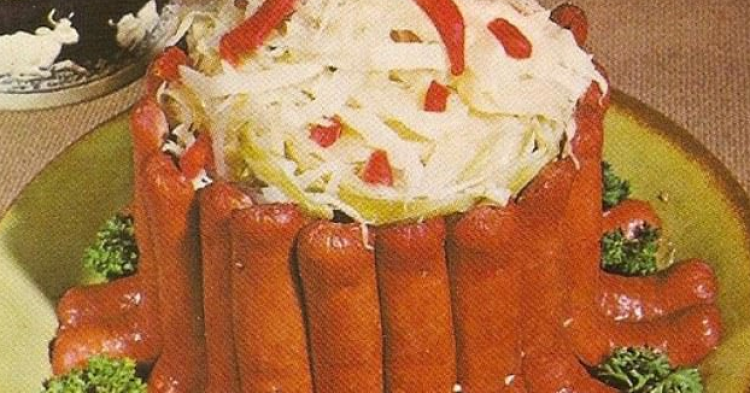 While people often refer to the 1950s as the “Good Old Days,” these advertisements prove that not everything is as good as some remember. Some recipes popularized during the decade have come back into view as these ads are now circulating the internet. However, anyone with any sense of taste will have to admit that not only do these popular 1950s food trends sound absolutely disgusting. They’re the last thing you’ll want your mother-in-law to bring to the holiday dinner.

In the 1950s, women spent their time at home, which meant that some women – especially those not blessed with the culinary gifts – had to try some creative ways to get their family happy about dinnertime. An online gallery of advertisements of the past has come forward to reveal that the 1950s were a hellhole of bad-tasting dinners subjected to suburban families across the United States. 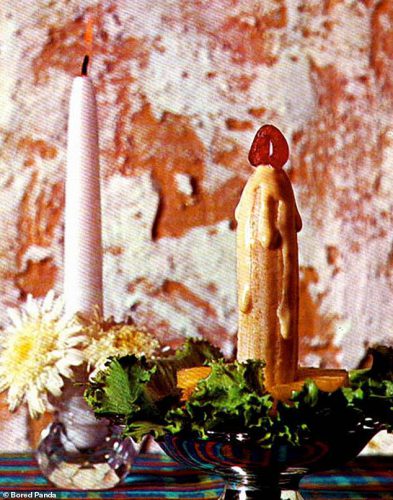 During the decade, now-common fruits like pineapples and bananas were still exotic to parts of the United States. This meant that suburban housewives were turning these tropical fruits into key elements of the dinner, pairing them with meats and cheeses, when that makes absolutely no sense.

We’ve curated some of the worst of the worst for you in this story. Hold onto your stomach because you’re going to want to retch as you hear about these “tasty” 1950s housewife treats. 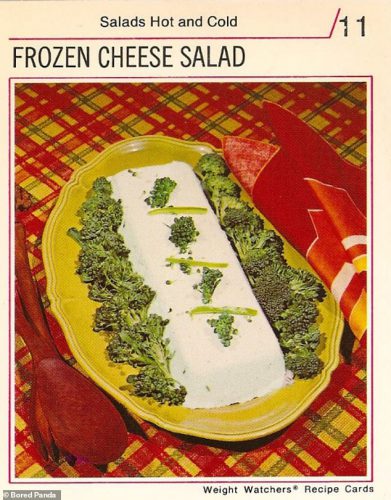 The frozen cheese salad was a “favorite” of the 1950s. It included a large block of cheese surrounded by chopped broccoli. While this sounds like a recipe out of the Weight Watchers catalog – but not one approved by Oprah – it is certainly not something you’re going to see served at any self-respecting home in America in 2019. However, in the 1950s, this was a hit! 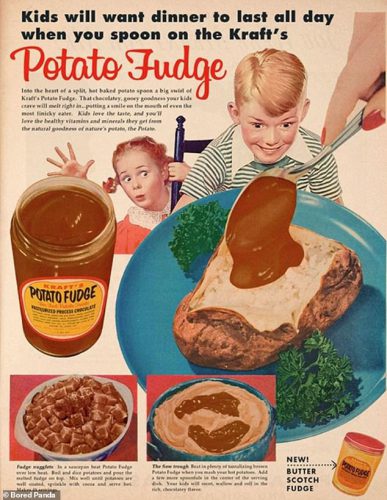 Potato fudge was another “favorite” among homes in the 1950s. At least that’s what the advertisement for this bizarre concoction promises. However, back in the day, advertisements did not have to speak as much truth as they do today. The laws around the amount of hyperbole they were allowed to use were much more lenient than today’s marketplace. However, the ad for this Kraft item promised that “kids will want dinner to last all day when you spoon on the Kraft’s potato fudge.” 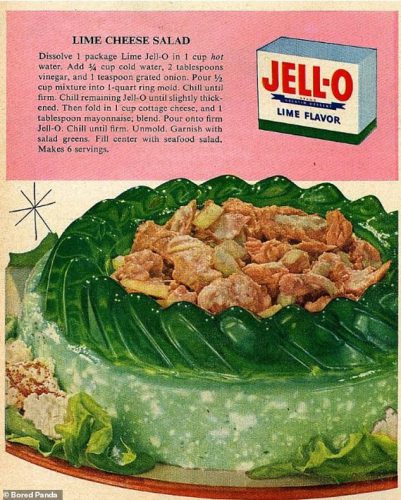 If you’re a fan of Jell-O, you’ll be sorry to learn that you missed out on the Lime Cheese Salad back in the 1950s. All you have to do to make this “beaut” a reality is dissolve a packet of Jell-O into the water and then follow the rest of the instructions as provided by the advertisement. If anyone actually made this cheese salad, they made a sorry mistake.

The chilled celery log was a popular item back in the 1950s if these ads had us believing them. Although the origin of this bizarre dish is unknown, it seems that someone decided to figure out a way to serve celery for desert. This recipe came straight out of the Weight Watchers catalog back in the 1950s and was popularized.

What do you think about these bizarre 1950s recipes?