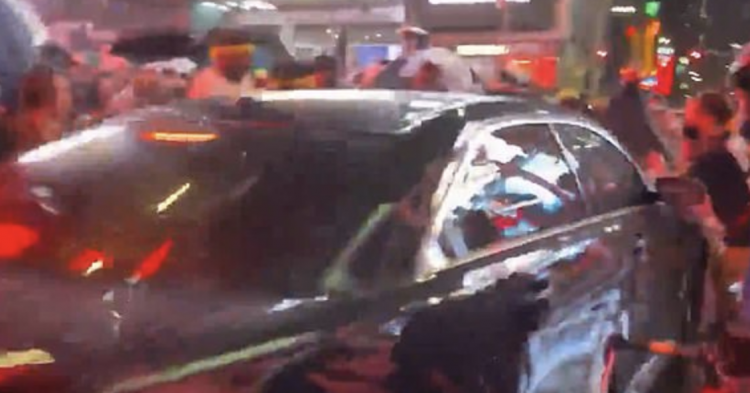 A few years ago, it was shocking when a vigilante drove his car through a crowd of peaceful protestors. But in 2020, the violence is more common than ever before – and barely gets noticed on national news. But after an angry driver saw a group of people protesting the murder of Daniel Prude, who was killed from police brutality, he drove his car through the crowd with the intent to harm the Black Lives Matter protestors.

The driver of the vehicle was proven to be “a Trump supporter” who drove his car through the gathering of peaceful protestors after leaving a Keep America Great rally in the city. Although the New York Police Department is keeping the identity of the vigilante protected, the cops confirmed he was a Trump supporter enraged by the Black Lives Matter protestors enough to use his car as a deadly weapon. 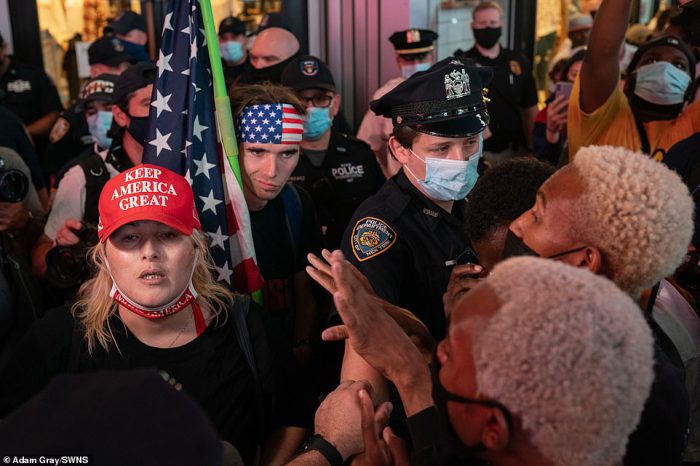 Police confirmed that the man drove his car through the peaceful crowd gathered in Time Square at 8 pm on Thursday. Police sources told NBC that the driver “was found to be a part of the Keep America Great rally” and used his car as a deadly weapon after he “exchanged heated words” with the pedestrians.

Photographs show the police trying to keep the Black Lives Matter protestors and the Keep America Great counter-protesters apart. NYPD also denied the rumor that the man who drove his car through the crowd of pedestrians was an undercover police officer driving an unmarked car. 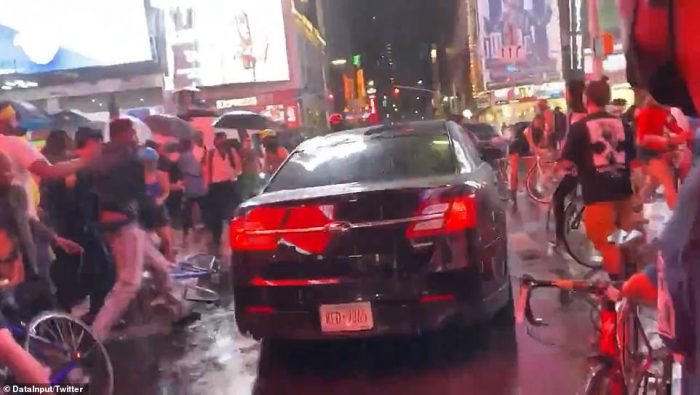 Footage from the scene of the terrorist attack showed the white man behind the wheel of the car wearing an American flag T-shirt. He then slams the pedal to the floor of the car and speeds into the crowd of pedestrians.

NYPD said no one was killed during the attack, and no one was allegedly injured. However, footage from the drive-thru attack seems to indicate otherwise.

Protestors were in Times Square because Daniel Prude, 41, was suffocated to death while in police custody.

The man behind the wheel of the Ford wanted to get through the crowd, so he ignored their lives and hit the gas. Screams ring out as the car comes speeding toward the crowd. A few brave people try to defend themselves from the apparent terrorist attack.

Although police said that no one was hurt as of 10 pm after the attack, witnesses at the scene begged to differ. They said the reckless driver caused several minor injuries.

Lora Gettelfinger, 33, was injured during the driving attack. The car smashed into her knee before fleeing the scene.

Qaaree McDaniel worked as “security detail” to protect the Black Lives Matter protestors. He was there when the driver used his car as a deadly weapon.

“I saw people getting hit, so I’m trying to get out of the way. Luckily I made it out just in time, but the car hit my bike, and my bike hit both of my legs,” said McDaniel, 23.

McDaniel also said that NYPD officers did not react when the car drove through the crowd of peaceful protestors.

“Just seeing how cops reacted, how they were so passive about it, it goes to show you where they stand,” McDaniel added.