Mom Of 7 Is Tired Of Neighbors’ Complaints About Her Kids, Puts Up Controversial Sign 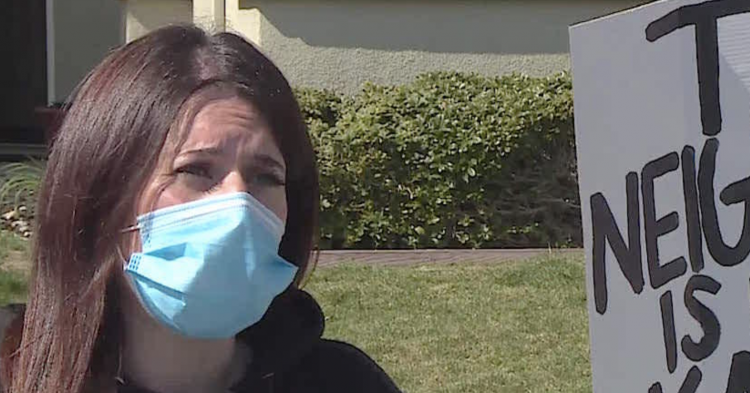 Raquel Davis is a busy mom of seven children. She lives with her family in Sacramento, California. Since the beginning of the coronavirus pandemic, Davis has urged her children to get outside and play as much as possible. This led the children to spend hours outdoors riding their skateboards around the neighborhood, which has caused other people to complain about her children.

Instead of coming to Davis about any issues, the neighbors go behind her back and call the police on her children. These neighbors file noise complaints about the playing kids. These complaints are numerous, and people have gotten very creative, even going so far as to complain how it seems they are living in the middle of a public park rather than the quiet community they thought they had moved into.

“So now that it’s with my kids and cops are being called on them, I don’t really know how to resolve this when they’re just skateboarding,” Davis said.

Davis’s children only skateboard in the neighborhood during the day. She is confused why the neighbors think her children should give up their outdoor hobby when it is broad daylight, and they’re on the public street.

“I didn’t know it was not okay for kids to be outside skateboarding,” Davis said.

One neighbor did approach Davis with a complaint. He said he could hear the children playing outside from inside his house. He asked the busy mom to get her kids to quiet down and to watch their language as they may have been using some offensive words. Davis asked her children to quiet down, but the neighbor left in a flustered mood.

“I felt this is my son’s birthday party. They’re out skateboarding, and I guess I was at my final straw. My last thing. I don’t know what to do, so I put up the sign,” Davis said.

But enough was enough. Davis’s neighbors had been complaining about her children and reporting them to the police throughout the coronavirus pandemic. She decided to create a sign to let her Sacramento neighbors know that their complaints are no longer welcomed.

“This neighborhood is full of Karens,” Davis wrote in capital letters on the sign. She posted it on the basketball hoop she had near her property.

Neighbors are not pleased with Davis or her family. One man, who spoke to CBS 13, said he has never called the police on the children but has been bothered by their skateboarding.

“These folks moved in, and it’s basically ‘The Animal House,’ house in the neighborhood,” Bruce Foster, an outraged neighbor, said. “There is like no sense of noise control.”

Foster reported that the noise had been a problem for a long time now.

“It’s like there’s a park going on here. This is a neighborhood. It’s not the park. The people that live here did not move next to the park on purpose,” Foster said.

But Davis already feels she has a grip on her children.

What do you think is the right way to handle this situation?