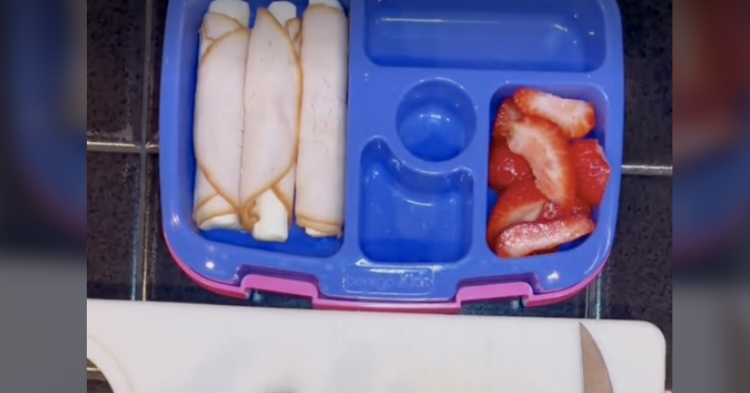 Tara Clontz has amassed quite the following on her TikTok channel. The self-described “wife, mom, artist, and Instant Po enthusiast” regularly shares content on the Chinese-created platform to show off the lunches she packs for her five-year-old child when they are off to school. However, one stranger accused Clontz of child abuse after seeing what mom was packing for the child’s lunch – however, many other TikTok users were left dumbfounded by the comment.

“It’s actually considered child abuse because you’re overfeeding your children and not worrying about their health,” the comment read — the account that posted the comment has since been deleted.

The video that sparked all the controversy has since received more than seven million views and counting – and has accumulated tens of thousands of comments from people across the world. But it was Clontz’s response to the critic who accused her of child abuse that sent her video into the viral stratosphere.

“Just another day of being accused of child abuse because I don’t want my almost-5-year-old to get hungry while she’s at school for 6 hours. Y’all are crazy. Crazy, I tell you,” Tara said in her now-viral response video.

Without missing a beat, Clontz goes right back to what she does best – packing her daughter a healthy lunch for her busy day at school. “Anyway! Today, I made something new,” the bustling mom said. She then walked viewers through the variety of snacks that she packed for her beloved child.

Clontz’s TikTok account has more than 460,000 followers. Most of her videos focus on her daughter’s lunchbox and the stuff that she fills it with. She also shares videos of the lunchbox after her daughter returns home from school to show viewers what her little girl did and did not eat out of its contents.

Although Tara Clontz received hateful criticism from one TikTok viewer – who has since deleted their account after all the negative publicity – various dieticians and nutritionists have responded to the mother’s videos and assured her that her snack and lunch choices are healthy and well-balanced for a five-year-old girl.

Below, you’ll be able to see Clontz’s viral “reply to @kayleemiddleton40 packing lunch for preschool!” In the video, the busy mom confronts the negative comment and discusses how she keeps her little girl healthy with a balanced array of food.

In the video, Clontz creates meat and cheese rollups with sliced turkey and string cheese sticks. She also slices up some fresh strawberries, which go right into the bento lunchbox. She also puts in some sliced grapes and carrot chips, which she creates at home with a veggie slicer. Mom also puts in some pretzel sticks to give her daughter a salty snack to enjoy while eating lunch at preschool. She also put a bit of Nutella in the middle so her daughter can dip the pretzel sticks and get a sweet treat.

What do you think about the lunch this mom packed for her little girl? Would you agree with the TikTok user who blasted her for “child abuse”?

♬ i hope ur miserable until ur dead - Nessa Barrett