Mom Admits She Doesn’t Like Her “Rude, Ungrateful” 5-Year-Old Daughter 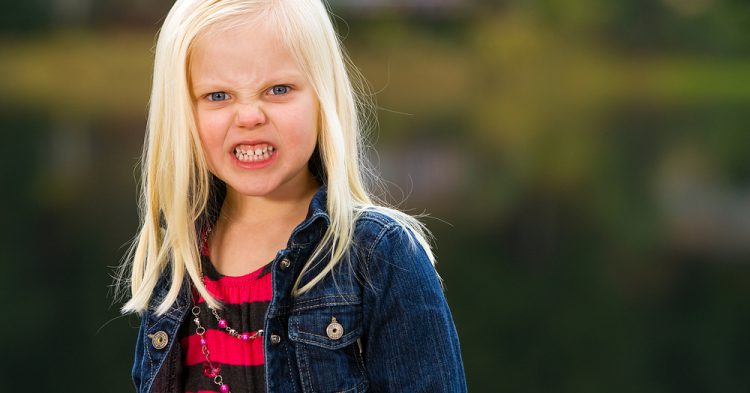 An anonymous mom has confessed that she doesn’t like her five-year-old daughter and is “not sure I can do another thirteen years with her.” In a Reddit confession, the mom wrote about how she “had a bad morning” and that she was going to go on a “rant” about the shared “custody of her five-year-old” daughter. In the Reddit post, the concerned mother writes about all the reasons she does not like her bratty child and why she feels she won’t be able to deal with the little girl until she reaches college age.

She describes her daughter as being “Shy around other adults. And with her peers. She is bad with sharing, brags a lot, is competitive, and is a sore loser. She has no friends because other moms have decided she’s too ‘mean.’” 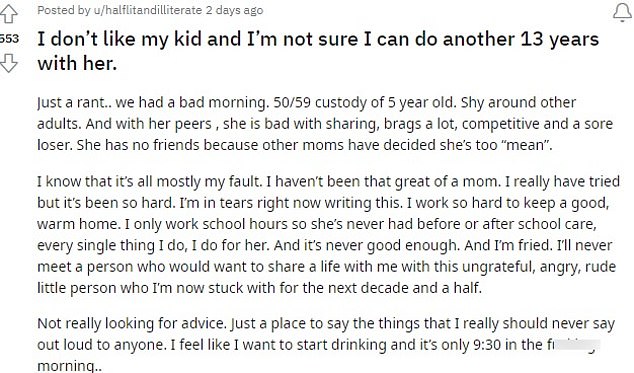 Although the mom finds her daughter to be a disaster, she writes how she believes she is responsible for the child’s behavior. Mom writes that she knows that she raised the child the wrong way and that she was doing a bad job as a mom – but that doesn’t stop her from disliking the fruit of her loins.

“I know that it’s all mostly my fault. I haven’t been that great of a mom. I really have tried, but it’s been so hard. I’m in tears right now writing this. I work so hard to keep a good, warm home. I only work school hours, so she’s never had before or after-school care. Every single thing I do, I do for her. And it’s never good enough. And I’m fried. I’ll never meet a person who would want to share a life with me with this ungrateful, angry, rude little person who I’m now stuck with for the next decade and a half.”

Mom added, “Not really looking for advice. Just a place to say the things that I really should never say out loud to anyone. I feel like I want to start drinking, and it’s only 9:30 in the f***ing morning.”

More than one hundred people replied to her post on Reddit. In response, mom shared a thank you note to those who had her back.

“It’s funny how sometimes the answer is to spend LESS time with them. I keep thinking if I could put more time in, it would get better, but now I’m thinking that it’s not helping either of us, or she’s better off not around me. So, yes, the first, less drastic step would be to do after-school care a few days a week, so I can have some time to breathe.”

One user suggested that a mom should get her daughter into sports as soon as possible.

“She’s a little young, but team sports are also great for learning how to share, how to pay attention to others, and how to win and lose together as a team. She would learn that she doesn’t get to make the rules, and she doesn’t get to have it her way. E.g., if there’s a dress code and she can’t have half her hair braided and half of it down, then she just needs to accept it.”

What do you think about this mom’s confession?