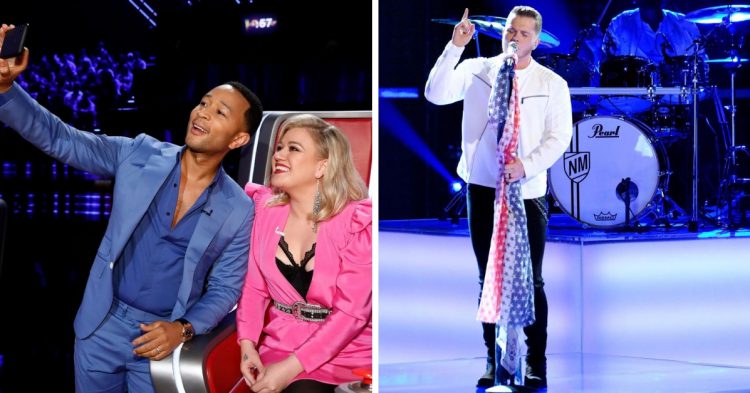 In order to get hired as a judge on The Voice, you had better be a very good singer. And while every judge on that program has proven that they know what they’re talking about and how to make the human voice sound as great as possible – they were hired to coach their singers and not to make political statements. But recently, Kelly Clarkson alongside legendary singer John Legend has come under fire because they offered criticism to “God Bless The USA,” which not one person asked them for.

It is common for the coaches on The Voice to share their opinions. They have to coach their singers through troubling times and push them through the wringer so they can rise to the next level in their performance careers. They have to do this without letting their personal feelings get in the way, and have a lot of challenging situations they need to deal with.

But when Kelly Clarkson and John Legend shared their views about a particular song, things got a bit too personal with the fans. That’s why thousands of people bashed Clarkson and Legend on Twitter following their harsh criticism of singer Gyth Rigdon who performed “God Bless the USA.”

Because the song choice was, understandably, a controversial decision – given how divided the country is around politics and even the National Anthem itself – Gyth was asking for controversy. And as Clarkson and Legend slammed Gyth for the performance, with completely reasonable criticisms related to the voice and the singing presentation, things got a bit heated when they also questioned the song choice itself. Nevertheless, they commended Gyth for choosing a song that meant a lot to the singer.

Because Gyth sang the patriotic song while on a stage adorned with red, white, and blue scarves, he tried to make it hard for the judges to offer any criticism, using America as his defense. Even Kelly Clarkson admitted that it was an obvious tactic, later talking to Country Living about Gyth’s performance.

“I feel like you can’t critique this song or you’re going to hell or something.”

Nevertheless, Clarkson wasn’t too shy about letting her criticism rock. She told the performer, “I will say, this is not my favorite vocal of you this season because I think you are a ridiculously talented vocalist.”

She then added, “The song is a lot of sustained notes, you know, because it’s all heart, it’s all of us singing together, usually in a big crowd. So, this wasn’t my favorite, but I loved that you picked it, and I love that it means something to you, and I think that it’s beautiful that it’s never been done on the show before.”

John Legend added, “I agree with Kelly that this wasn’t your greatest vocal performance, but it was very strong, and I felt the energy and the emotion.”

Obviously, the general public did not agree with their thoughts.

What do you think about The Voice judges’ criticism of this performance? Did Twitter go too hard on them?