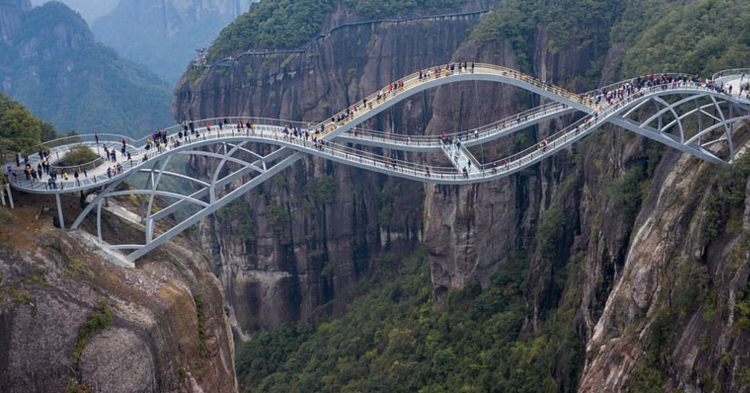 Although locals refer to it as the Ruyi Bridge, most people know it as the scariest bridge in the world. Located in China, this double-decker bridge is built from glass, making it terrifying for most people who attempt to cross it on foot. Now, the bridge has become a viral phenomenon as videos and images of it started appearing on social media as people explain how they felt as they tried to summon the courage to cross this bridge, which resides about 460 feet above a massive ravine.

On Twitter user shared his reaction after viewing drone footage of the bridge, “If this is real, there would be a location (long/lat), so I call it fake.” 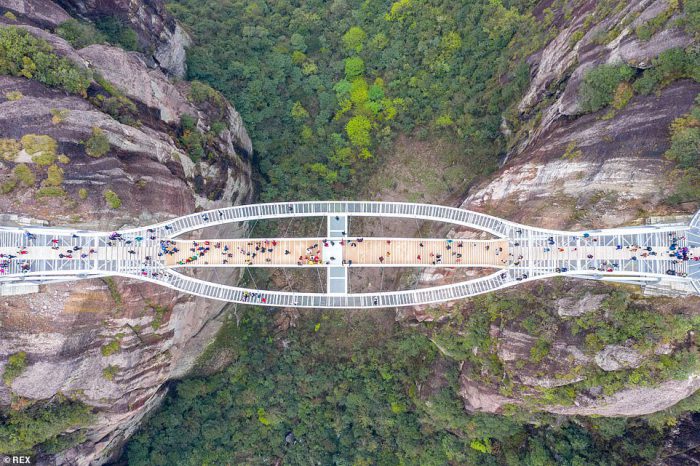 According to a YouTube channel entitled Oriental Image, “The ‘Ruyi Bridge’ in the Shenxianju Scenic Area in Xianju county is shaped like a jade Ruyi in the sky, attracting many tourists to take pictures, Taizhou City, East China’s Zhejiang Province, 17 October 2020.” The aerial footage of the bridge was uploaded to YouTube at the beginning of November 2020.

The bridge is only one hundred meters long or 328 feet. However, it was designed in such a way to be perfectly terrifying for those who are brave enough to attempt to cross it. Since the bridge is created from transparent glass, people who cross it can look down toward the bottom of the ravine while standing safely on the bridge.

Arquitectura Viva confirmed that the bridge was designed by He Yunchang. As a steel expert, he was the person who helped create the iconic Beijing’s Bird’s Nest Stadium for the 2008 Olympics.

Not only is the Ruyi Bridge windy, but it is also one of the highest bridges in the world. The bridge opened to the world in September 2020 and has already hosted more than 200,000 visitors. 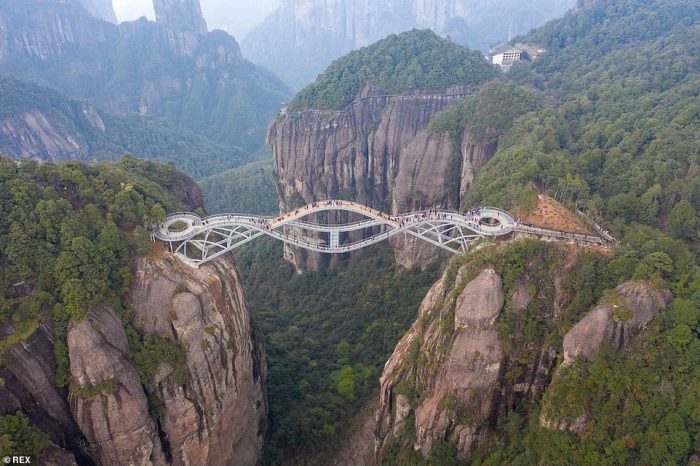 Daily Mail ran a report on the Ruyi bridge, which attracted hundreds of comments from viewers across the world.

“Just looking at the photos would give me nightmares.”

“Omg, no way would I cross that. It’s my worst nightmare.”

“China making awesome things, and here we canceling everything.”

“I might consider it on virtual reality, but even then, probably not.”

“Try walking on Rainbow Bridge built into the rock over the Grand Canyon, with a sheer drop of hundreds of feet. That’s another leap of faith.”

“Clever, no doubt, but why ruin such a beautiful location with something so obtrusive?” 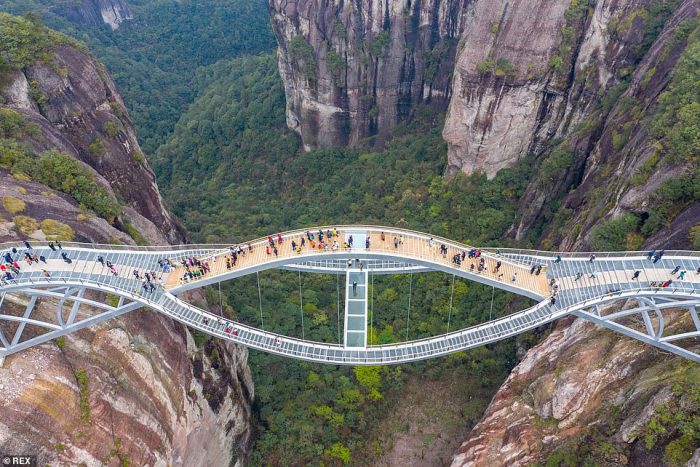 Other readers expressed their concern because the bridge was made in China.

“I don’t trust anything made in China.”

“Based on my experience of China cheapies, I’m guessing the bridge was straight when made and then warped out of shape within a week or two…”

“Having seen (on LiveLeak) numerous videos of people being swallowed by collapsing Chinese escalators and similar examples of failing Chinese engineering, I would give this bridge a miss.”

“While China is busy building and innovating, British are busy pulling down Statue.”

What do you think about this glass-bottom Ruyi bridge in China? Would you cross it?