If You See These Bugs In Your Yard, Do NOT Try To Touch Them 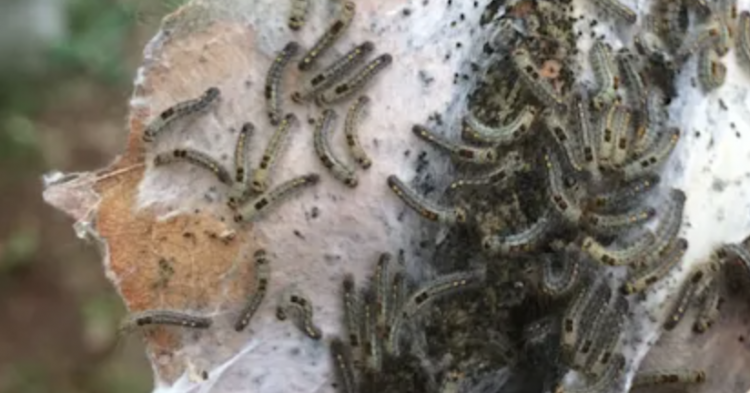 As if the coronavirus pandemic was not enough to contend with, residents of Maine are desperately trying to fend off an invasion of poisonous caterpillars that have taken over much of the state. Meanwhile, other parts of the United States are dealing with swarms of cicadas that have crawled out of their hiding places in the ground. Although cicadas can be a lot to contend with, these caterpillars, known as browntail moths, are actually quite dangerous and can cause people to develop painful rashes and even trouble breathing.

The browntail moth caterpillars are not very large. They’re only about an inch-and-a-half in length and are recognizable from the white dashes that go down their sides as well as two red dots placed on their backs. They’re an invasive species that have been ravaging the state of Maine so far this spring, leading into the summer.

Typically, browntail moths are common along the coast of Maine as well as Cape Cod in Massachusetts. However, this year has been especially big for this invasive species, and they have been spotted in all sixteen Maine counties. Jim Britt, a spokesman for the Maine Department of Agriculture, Conservation and Forestry, confirmed that this invasive species had invaded more parts of the state this year.

“People are finding them everyplace: on the ground, on the picnic table, on the electrical box, on the corner — you name it,” Britt said. “They are heavily present. Folks will see them all over.”

He added, “We are in the midst of an outbreak.”

The tiny hairs on these caterpillars actually are toxic. The poison can remain viable on these hairs for up to three years, making them especially dangerous, according to a warning from the Maine Department of Health and Human Services.

Simply touching the caterpillar’s hairs can cause a red and bumpy rash that’s similar to what people get from poison ivy. The department said that the rash could linger for as long as several weeks.

However, if the caterpillar hairs get inhaled, they can result in severe breathing problems. Because of this, it’s best to stay away from browntail moths lest they negatively affect you.

There are some people who don’t develop symptoms when coming into contact with these caterpillars. Britt is one of those people because he recently came close to these invaders at a Maine park.

“They were everywhere, and I had absolutely no reaction to them,” he said.

Specific treatments do not exist for the rash developed from touching a browntail moth. Instead, the department suggests treating the rash with calamine lotion.

The caterpillar outbreaks have gotten very severe in parts of the state. Twenty miles north of Augusta in Waterville, Maine, the mayor called an emergency meeting of the City Council and urged them to declare a public health emergency for the community.

“After a pandemic year, while we are finally able to start getting out and socializing, this is the last thing we want to be dealing with,” the mayor, Jay Coelho, said at the meeting.