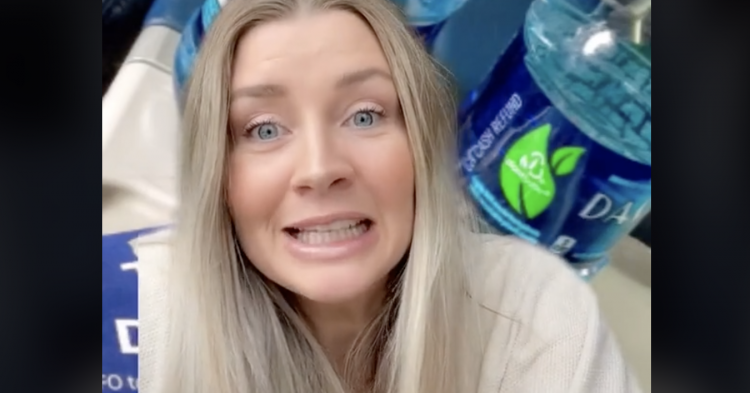 A flight attendant has turned to TikTok to reveal a disgusting thing about flying on planes. The flight attendant, Kat Kamalani, urges her followers on TikTok to avoid drinking water on a plane because it violates her first rule. When the flight attendant comes by your seat on the plane, avoid ordering any drink that was not in a can or bottle for one very important reason.

“Rule number one: Never consume any liquid that is not in a can or bottle,” Kamalani said in her viral video. But why should passengers avoid ordering these types of drinks during the beverage experience onboard the plane? Her warning extends to beverages beyond water, including hot coffee and tea that get poured out on the flight.

“[The] water tanks are never cleaned, and they are disgusting,” she said. Kamalani added that she and her fellow flight attendants know better than to drink the coffee or tea on the flight. Instead, they avoid them altogether.

But what if you have a child and need to mix their baby formula? What should you do? Kamalani has a solution for people in that situation, and it is quite easy to execute. Just ask the flight attendant for a bottle of water, and you’ll be able to mix your own beverage. Then if you need to heat the beverage, you can ask the flight attendants for a cup of hot water, which you can use to hold the water bottle to warm it up.

In a different 2019 study from Hunter College NYC Food Policy Center, the researchers found that passengers should avoid washing their hands with water onboard a flight. Because water all comes from the same tank, it might not be the freshest stuff around. Instead, the researchers suggest using hand sanitizer to keep clean while on the flight.

“Alaska Airlines and Allegiant win the top spot with the safest water in the sky, and Hawaiian Airlines finishes No. 2,” said Charles Platkin, Ph.D., JD, MPH, the editor of DietDetective.com and the executive director of the Hunter College NYC Food Policy Center.

Which airlines have the worse water quality? According to the study, those were JetBlue and Spirit Airlines.

“Except for Piedmont Airlines, regional airlines need to improve their onboard water safety,” Platkin said.

Critics on social media urged flight attendants and flight crews to do a better job cleaning up the airplane.

“You guys should clean them,” a person commented. “Seriously, that’s messed up.”

“This is irresponsible!” another added.

“[Flight attendants] aren’t mechanics who have access to welded sealed water tanks on a plane,” another explained.

Kamalani has managed to build herself quite a following as she shares videos as a flight attendant online. As a user of the Chinese-created social media platform, Kamalani has jumped on the trend of providing insights into travel, especially during a global pandemic.

What do you think about this flight attendant warning you about water on flights? Are you surprised to know that it is not necessarily that clean?