FedEx Driver Is Going Viral After Making This “Odd” Delivery 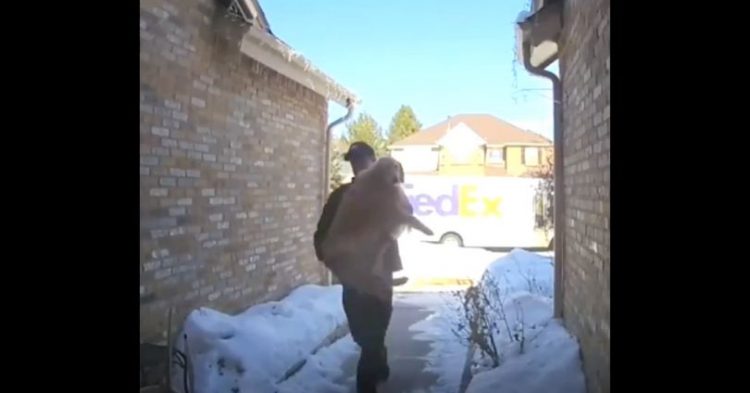 On a windy, wintry day in Colorado this past March, the wind blew open the door just wide enough for the dog to slip out. With no one to watch him, three-year-old Catcher, a golden retriever, bolted out into the snow and went exploring. Although he was delighted to be outside with all the scents and smells of the world, Catcher’s family was distraught over his disappearance.

Lisa Menzies, Catcher’s owner, happened to be out of town when the unthinkable happened. With her dog escaped from the property, she had no idea about it at all. Only later, when Menzies realized how lucky she had been, did she review the Ring Doorbell footage to see exactly what happened. Upon taking that closer look, Menzies was impressed to see the dog coming home after a FedEx delivery driver went out of his way to return the lost golden retriever to his home.

“We were getting some repairs done on the house,” Menzies told KDVR. “Our contractor left to go to lunch and shut the front door, and the wind blew the door open while I was gone, and Catcher escaped. She could have wandered out to a busy road, and you hate to think what’s going to happen then.”

Footage from the doorbell camera showed the pooch wandering around the home’s front lawn. Thankfully, the dog had not gotten too far after escaping. When the Good Samaritan FedEx driver came up to the property, he noticed the loose dog, so he figured he would help. Going above and beyond what was expected of him on the line of duty, the delivery driver scooped up the pooch and carried him back to the home.

“He just said, ‘I found your dog, and the address on her tag is where I’m going to take her’ and then he put her in the house with such care.”

Footage shows that the FedEx driver brought the dog to the front of the house, where he noticed the front door was open. He put the dog into the home and closed the door behind him.

“Seeing him carry her into the house like that … in my head, I was thinking of the theme song from the Titanic,” she told KDVR. “He was taking such care and love with her that it was really amusing.”

Unfortunately, Menzies does not know the name of the hero FedEx driver who saved Catcher from getting hit by a car. Although she may run into the driver again when another item gets delivered, right now, she is hoping someone can help share the name of the Good Samaritan.

“He interrupted his day and his package delivery schedule to pick her up and hand-carry her into our home and lock the door behind him. I don’t want to think about where else she could have ended up.”

Although this driver did not have to help the loose dog, he did out of the kindness of his heart.

Menzies added: “He is certainly our family’s hero.”