Everyone On The Boat Screamed When They Reeled In This “Monster” 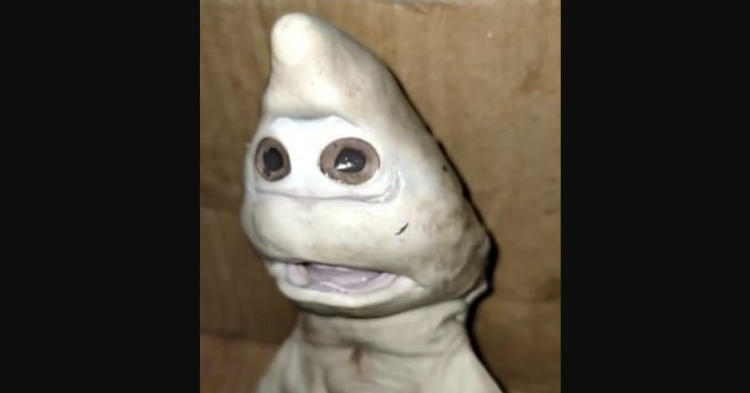 If it is true that monsters do inhabit the sea, a fisherman from Indonesia may have found proof. During a recent outing in the ocean, a fisherman caught a mutant shark with “a human face.” Images of this bizarre creature have begun circulating across the world via the internet, and experts are stumped by how this creature could have ever developed such a shocking deformity.

The shark was caught in the waters near Rote Ndao in the East Nusa Tenggara province by 48-year-old Abdullah Nuren. The mutant creature was discovered after Nuren caught an adult female shark in his trawler. When he cut open her belly, he found three baby sharks inside, including the freakish mutant. 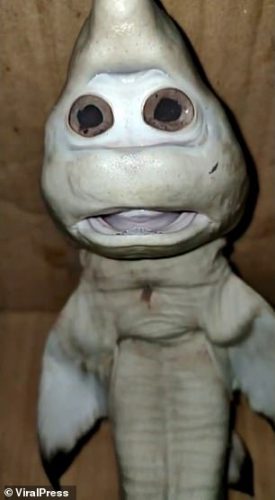 The “human” appearance of this specimen included both two large eyes and a gaping mouth beneath its pointed snout. The discovery was a shock for the experienced fisherman.

“I initially found a mother shark caught in the trawler net,” said Nuren. “The next day, I split the belly of the mother shark and found three pups in the stomach. Two were like the mother, and this one looked like it had a human face.” 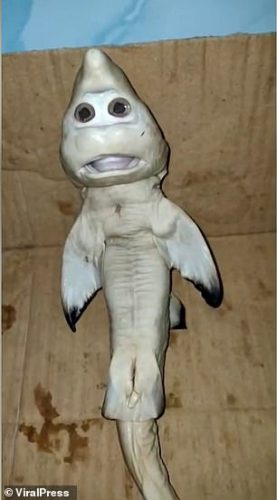 Because the shark was so unique, Nuren took the creature back to his family. They helped him preserve it so he can keep it as a good luck charm. Since finding the shark, Nuren’s neighbors have offered to buy it from him, but he has refused all of the generous offers.

“My home has been crowded with people who want to see the shark,” he said. “Many people want to buy it, but I will preserve it instead. I think it will bring me good luck.”

Readers of Daily Mail found the images of the deformed shark to be quite shocking. Hundreds of people shared their gut reactions to these pictures in the comment section, which included the following thoughts. 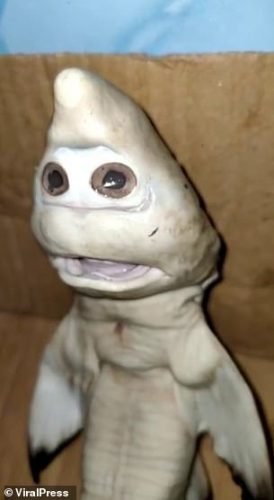 “Yes, let us all stand around and make jolly of the creature that has been born with abnormalities! Oh, what fun it is to make a spectacle of this scared and alone creature of curiosity! Let us lay it out on a piece of cardboard and send it into the press so others can enjoy the sight! What a time to be alive!”

“This world is doomed if we don’t stop killing everything”

Some people questioned why Nuren kept the adult shark in the first place. 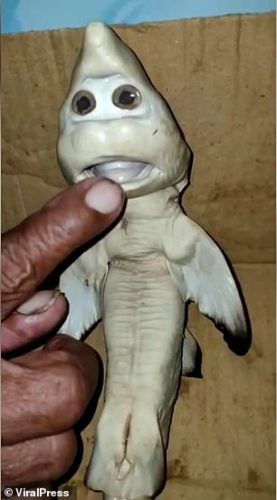 “If it wasn’t being caught to eat, then It should have been put back into the water to get on with life. Humans sicken me sometimes. Let us all make jokes about a deformed shark. It is fascinating but killing it just to mock it was unnecessary.”

However, others suggested that the shark had already died by the time Nuren found it.

“Already dead, but quite frankly, it’s all a bit sickening. It’s pretty much the sort of warped that we hear from Chinese waters. That said, over there, someone would want to eat it, or bits of it due to superstition and a basic lack of understanding of how the body works.”

What do you think about these images?