Entire Church Stages Walkout After Pastor Put Up This Sign, But He Refuses To Back Down 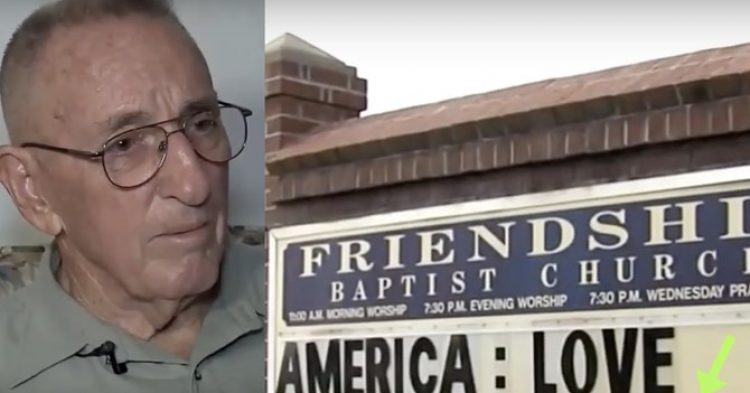 When a pastor at a Virginia church decided to get political and align himself against the enemies of President Donald Trump, his congregation staged a walkout and abandoned him at the pulpit. The pastor of the Friendship Baptist Church in Appomattox, Virginia, mirrored Trump’s complaint about the women of color in the House of Representatives when he told them to leave America and return to their countries of origin, although only one of them was an immigrant.

The pastor decided to try to connect the church and state by creating a sign on the front of his church that said, “America: Love or leave it.” When the congregation realized that the pastor was getting political, they left his flock and joined another church in the community.

The walkout was staged by congregants during Sunday School at the church. And Pastor E.W. Lucas does not understand why his flock is no longer with him. All he did was post a sign on the front of the church that mirrored the president’s targeted tweet against Alexandria Ocasio-Cortez, Ilhan Omar, and others that he calls as part of a “squad” of enemies against him.

Trump’s tweet called for the progressive women of color to leave American as he felt they “ought to go over there and live in these other countries for a little while.”

Many people thought that pastor Lucas’s sign was similar to a KKK sign that read, “This is Klan Country ‘Love it or Leave it.’”

Although congregants staged a walkout at the church and refused to follow the pastor following the posting of the controversial sign, some remained by his side and argued that the pastor only meant a simple message – and did not intend for people to read into the message more than what it stated.

WSET reported that the 11 am Sunday service was empty. Most members of the church abandoned pastor Lucas to his views. On Monday, the church’s Facebook group had been deleted, indicating that no one was supporting it now that the Friendship Baptist Church turned its faith-based service into a political one. 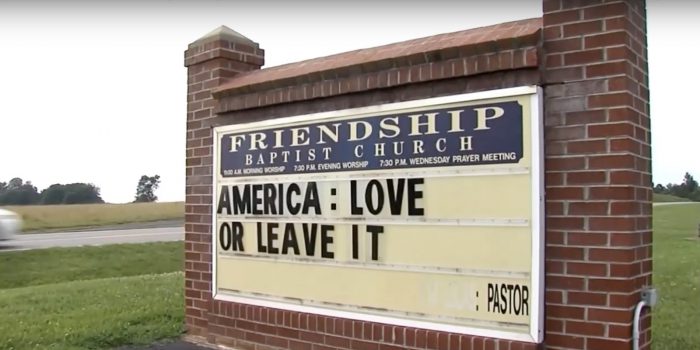 He added, “I thought I was going to make some remarks regarding the situation in Washington. It just came to me… ‘America, I love it. If you don’t love it, leave it.’ Since we’ve had favorable comments on it, I thought I’d just leave it a while.”

Residents in Appomattox were conflicted.

“It’s up to each individual person,” said William Thompson, Appomattox Resident. “Ultimately, if we have problems, we should try to fix it.”

“People that feel hard about our president and want to down the president and down the country and everything, they ought to go over there and live in these other countries for a little while,” said Pastor E. W. Lucas, Friendship Baptist Church.