Elderly Woman Is Shocked When She Sees Her Bill From The Plumber, Posts It Online For All To See 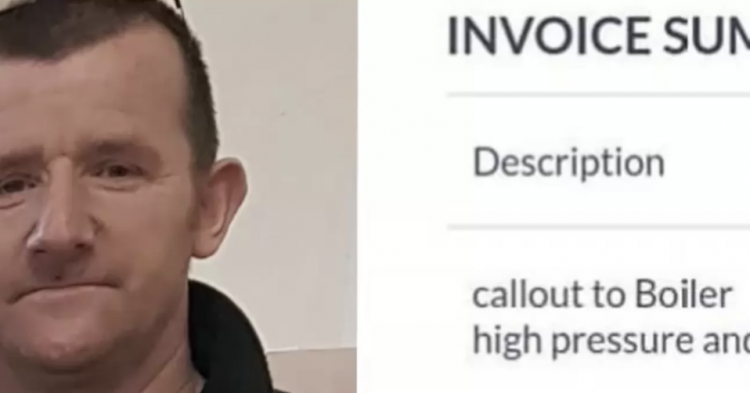 All homeowners know that it can get quite expensive when your property is in need of an experienced plumber. Plumbers, like all trade workers, can charge a lot for their services because they require specialized knowledge that few people possess. So, when a 91-year-old woman realized that her boiler was not working properly, she had to make the call to a local plumber to get it fixed lest it gets worse and cause severe damage to her property.

However, the leaky boiler was the least of concerns for the 91-year-old woman. Besides her advanced age, the woman was battling leukemia – a deadly cancer of the blood – which put her life in jeopardy. Nevertheless, the old woman did the responsible thing and called the plumber to come to help her deal with her boiler so she’d be able to have a warm home in the winter months.

Plumber James Anderson was assigned to the job. The dedicated man, who has a family of his own, noticed the old woman’s frail condition and spoke to her about her health. Through their conversation, he learned that she was battling the deadly form of cancer and decided that he’d surprise the old British woman with a good deed later in the week.

When it came time for Anderson to hand the senior citizen the invoice for his work, he did something so generous that he has become an internet hero – if not an internet saint.

As a father of five, Anderson, 52, wanted to do something good for the world through his plumbing and heating business. He created a company called Depher, which helps people in need get the plumber services they need to keep warm and have a home that works.

Anderson wanted people in his community to know that they could rely on his company to supply the plumbing and heating services needed even if they did not have the funds to do so.

That’s why Anderson gave the woman his best plumbing services free of charge. And when the invoice made its way onto the internet, people applauded his efforts to do good work for people in need.

“No charge for this lady under any circumstances. We will be available 24 hours to help her and keep her as comfortable as possible,” the plumber wrote in his invoice.

As the internet passed from person to person online, it quickly grew into a viral hit. People were delighted to see this plumber doing something for others during a time when so many people were just trying to make things work for themselves and their families.

“We didn’t expect it. It’s been everywhere,” he said about the public’s response.

By switching his company over to a non-profit, things became harder for Anderson. Nevertheless, he knows that he is doing good work.

“A lot of people close to me ask: ‘why are you getting yourself into debt? Why are you doing this?’” he said. “To me, debt is debt… I would rather owe some money to somebody, and another person is alive and happy and safe. It’s an ethos that’s in my heart, and it will always stay there.”