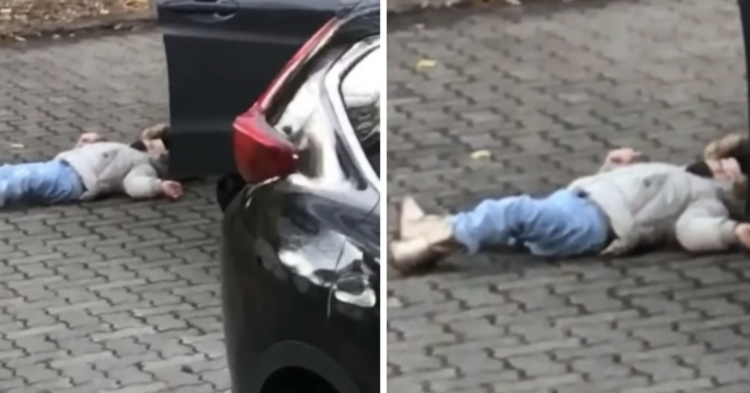 Every parent must face off with a toddler in the middle of a temper tantrum. There’s just no way a child can grow up and pass through the toddler phase without bursting into tears over the most mundane thing and falling to the ground to show just how upset they are. But one dad was able to deal with the inevitable situation in a way that has some people calling for experts to give dad a parenting award.

Footage captured the moment the father of two-year-old Juliette responded to the little girl’s latest temper tantrum. The dad, who is from Canada, showed everyone how to deal with a terrible two temper tantrum when he calmly handled the situation caught on video.

Dad picked up Juliette from school and was about to get into the house after picking up some groceries. However, Juliette refused to comply with dad’s plans and collapsed to the pavement in a ball of tears. Not only was Juliette watering the grass with her tears, but she also refused to walk, which makes things a lot harder for this dedicated dad.

The video, which was uploaded to YouTube in November 2018, shows dad calmly handling the situation like a champ. Because he has to carry both the bag of groceries and the non-compliant toddler, dad does so without missing a beat. Although Juliette thinks she has made herself immobile by lying on the cobblestones, she forgot that dad was strong enough to pick her up and carry her into the house. That’s exactly what dad does when he bends his knees and grabs Juliette up by her sweatshirt, holding her just like a bag of groceries.

Without even cracking a smile, dad walks the rest of the way along the path toward the front door of the house. Although we cannot hear whether or not Juliette is still crying, it is possible that she’s gotten over her fit and is now enjoying the free ride thanks to her dad.

According to YouTube, the video was filmed in Quebec, Canada. Mom also shared a quick description of what dad did: “I took this video from the home of my boyfriend and our daughter, Juliette, who turned 2-years-old in October. He was getting back from work and her from kindergarten. She is a little girl who loves to laugh and make other laugh. What’s even funnier is that she is more than 3-feet-tall and over 37 pounds heavy, and the jacket didn’t break. She often does stuff like this, and this is just how we love her.”

Millions of people watched the video of dad picking up Juliette after she threw her tantrum. Here’s what viewers had to say about it:

“Well done, Dad. Calm, no drama parenting. Terrible twos are called that for a reason.”

“I just left them lying there and walked away,” one mom suggested. “They got up real fast and haven’t tried it again.”

“Now, that’s a SMART solution. Instead of having a nasty fight with a kid having a tantrum who refuses to walk!”