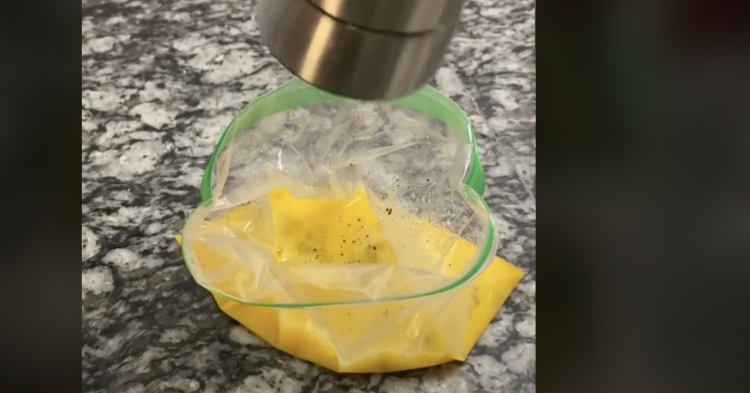 All sorts of videos have been exploding in popularity across the TikTok app. However, food clips and recipe tips continue to be extremely popular among users of the Chinese-created social media platform. Now, TikTok user Kyle Istook is blowing up the platform with his new video showing other people how he makes breakfast in a bag – but Istook’s cooking clip is going viral for all the wrong reasons!

Istook, a busy father, captioned his video with simply “would you ever try this?” to which thousands of other TikTok users bombarded him with their responses in the comments.

The video begins by showing a plastic sandwich bag that is open and standing on the granite countertop. Istook then cracks a brown egg into the bag. With a pair of eggs in the bag, he closes it shut and then uses his fingers to squish it up to mix it up into a scramble. Although Istook uses two eggs for the video recipe, you can use any number of eggs, so long as they fit in the plastic bag.

Istook then reopens the bag and grinds some black pepper into it. Next, he adds a sprinkling of bacon bits and some shredded cheese. Because he’s only using two eggs for his omelet in a bag recipe, he doesn’t add much bacon or cheese. Other ingredients could go into the bag at this stage if you’re not in the mood for bacon or cheese. You could try chopped onion or bell peppers if you’re looking for a healthier alternative.

Istook then closes the bag and mixes it up again to make sure all of the ingredients are completely combined. Then, he takes the bag over to the stovetop where he has a pot of boiling water. He lowers the plastic sandwich bag into the pot and allows the hot water to cook the eggs.

About thirteen minutes later, he removes the omelet in a bag from the boiling water. He opens the bag and lets the omelet fall onto a plate. When he cuts open his egg creation, he reveals a nicely cooked omelet that requires very little clean up and is quite easy to make.

Istook shared his recipe video from an omelet in a bag because he was responding to another TikTok user’s request for people to share lifehacks that they now incorporate into their daily lives. Apparently, this omelet in a bag trick is something that Istook learned online and has been doing at home ever since.

Thousands of TikTok users wrote comments on this busy dad’s video. Many people reveled in the lifehack.

“My jaw literally just dropped. This is definitely how I’m making eggs from now on.”

However, there were many others who were not so sure they’d do it.

“I don’t know about boiling the plastic,” one person fretted.

“Not boil-safe plastic. You should use cooking-safe plastic if you want to do it that way.”

“This actually takes longer than the regular way. I don’t understand why people do this.”

Would you ever try this ##lifehack?