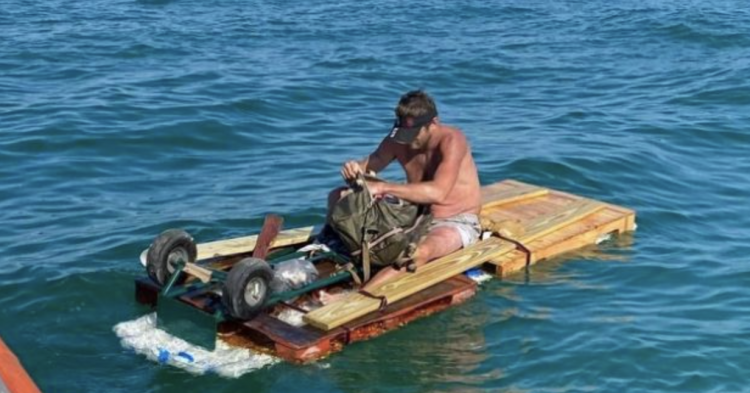 Where would we be without the brave men and women who serve in the United States Coast Guard? These heroes keep our bays, oceans, and other waterways safe so we can venture out on the open water and experience the freedom of what it means to be an American in the 21st century. But every once in a while, the Coast Guard comes across a unique circumstance that we simply cannot ignore – like how this guy decided to go coasting out into the middle of the ocean on a ramshackle homemade raft only to desperately need the Coast Guard to save his life before he drowned.

The man thought he was going on a grand adventure off Key West, Florida. But he soon found himself out of control when his homemade raft wandered a bit further out to sea than he had originally planned. Although the man has not been identified – due to the embarrassment he would likely endure as a result of his name making it on the internet – the United States Coast Guard had to use taxpayer money to rescue him from potentially drowning out in Fort Zachary Taylor State Park at about 3 pm Saturday.

The man’s name was not listed, but his age was determined to be 41-years-old. He decided to go floating out to the sea without any food, no water, no radio, and no safety equipment. It was unclear why he decided to risk his life for the sake of taking his homemade raft out into the warm waters off of Key West. Could he be a victim of the rampant drug use in the area?

The man was in desperate need when the Coast Guard came to his rescue on the taxpayer’s dime. They transported him to the Lower Keys Medical Center, where his condition was unlisted as of Monday morning.

Although the Coast Guard did not issue a formal report after their rescue of the man on the raft, they did share details of the act on social media, which quickly went viral.

The USCG Southeast wrote, “Due to safety of life at sea concerns, USCG Station Key West rescued a 41-year-old man aboard a makeshift raft with no food, water or radio near Fort Zachary Taylor approx. 3 pm. The man was transferred to awaiting EMS & taken to Lower Keys Medical Center.”

After the Twitter post, reporters demanded more information from the Coast Guard. They wanted to know who this man was who was wasting taxpayer money after foolishly floating out to sea on a makeshift raft.

“That is all the information we had,” said Coast Guard spokesman Petty Officer Jose Hernandez in Miami.

Hernandez confirmed that the man was not facing medical distress. He would probably be released from the medical center quickly.

“He was just a little sunburned,” he said. “We haven’t kept up with him since then.”

Besides refraining from embarrassing the man, the Coast Guard did not release his name because he did receive medical treatment.

What do you think about this man taking a raft out to sea without any provisions?