Cheerleader Cries During Daddy-Daughter Because Dad’s In The Army, Then Stranger Hops Fence 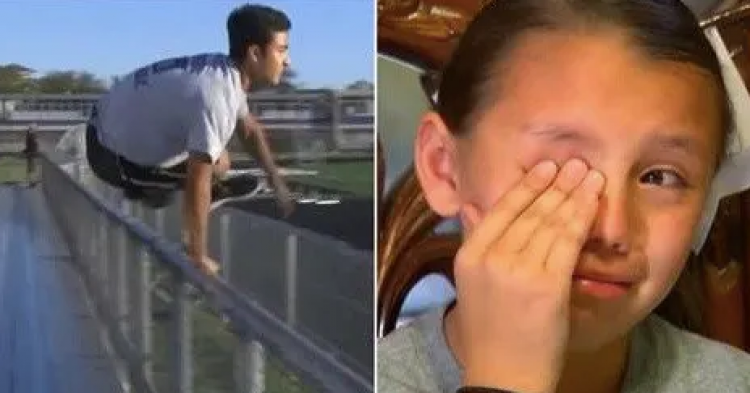 A dedicated dad was training 1,700 miles from home at Travis Air Force Base in California when his nine-year-old daughter was scheduled to participate in a daddy-daughter cheer for the cheerleading squad. Nine-year-old Addie Rodriguez was in tears when she knew that her father was not going to be able to make the special event because he was thousands of miles away from home training for the military to defend American freedom and democracy.

However, Addie, who participates in cheerleading at St. John Bosco Elementary School in San Antonio, Texas, really wanted her father to attend the daddy-daughter event. However, her father, Abel Rodriguez, was training at the time. He is a senior airman who has risked his life fighting in the name of America across the world, including in Iraq and Afghanistan.

KTLA reported that during the football game, the fathers of the cheerleaders were supposed to step out of the stands and lift their daughters onto their shoulders. While every other girl on the team had her dad present to perform the stunt, Addie was left alone and embarrassed.

Her mom, Alexis Perry-Rodriguez, explained, “It was really heartbreaking to see your daughter standing out there being the only one without their father, knowing why he’s away. It’s not just an absentee parent. He’s serving our country.”

As Addie watched the other cheerleaders enjoy the daddy-daughter routine, she began to cry. She really missed her father and wished that he wasn’t in the military and didn’t have to leave home for long stretches of time to commit to training in the name of war. It was very hard for Addie to watch the other girls get to spend time with their fathers.

“I just felt like really sad because I missed him a lot,” says Addie.

However, a stranger named Matthew Garcia noticed Addie was suffering. He jumped over the fence and went right up to the nine-year-old girl to ask her if everything was all right.

Garcia told WOAI, “I ran down from the bleachers right here. I just hopped the fence, and I went over, and I kneeled down, I talked to her, and I said, ‘Are you OK?’”

It didn’t take a degree in rocket science for Garcia to figure out that Addie was missing her daddy, so he took the man’s place and lifted the nine-year-old girl onto his shoulders so she wouldn’t feel left out.

Although it would have been better for her dad to do the stunt, both Addie and her mother were delighted by the stranger’s act of kindness.

“I realized what he [Garcia] was doing, and my heart just melted,” says Alexis. “It was just the most beautiful thing.”

Garcia, a high school senior, was just happy that he was able to help the little girl during her moment of need. Addie, however, was eternally grateful to her hero.

“I just felt like somebody saved my life,” said the fourth-grader.

“She’s really tough, and she understands that dad goes away for a reason,” says Alexis.