Bride Decides To Wear Her Baby Instead Of A Veil, Breastfeeds While Giving Vows : AWM

Bride Decides To Wear Her Baby Instead Of A Veil, Breastfeeds While Giving Vows 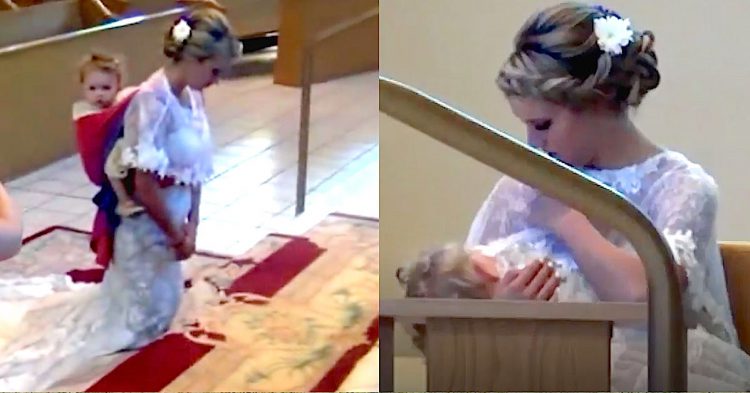 When Dalton Mort gave birth to daughter Ellora, her life was forever changed. It was a good thing. The happiest day of her life. Although labor was tough, Mort was so happy to welcome Ellora into her life despite being only nineteen-years-old. Because Ellora came along before Mort bought a house and got married, she was by her side for all of life’s major milestone moments, and that’s why mom knew that Ellora had to play a significant role in her upcoming wedding.

During the grueling wedding planning process, Mort racked her brain on how she could include her little girl in the best way possible. Because Ellora was just two-years-old, she knew that she’d not be able to execute the role of a flower girl that well. She might cry or fail to walk down the aisle like she was supposed to. Mort didn’t want to put too much pressure on her little girl.

That’s why the bride decided to jump on the bandwagon with a new trend that was going around social media lately. It’s called babywearing, which meant that the bride would strap the toddler to her body and haul her down the aisle during the wedding. Mort wore Ellora all the time while raising her, so it was not going to be tough to do it while reciting her vows and marrying the man of her dreams. Mom felt it was only right.

“I chose to wear my daughter because I knew it would keep her calm on a very hectic day,” Mort told Inside Edition after images of the big day went viral. “Wearing her also allowed me to incorporate her in the ceremony in a way that was normal for both of us.”

During the mass of the wedding, Ellora fell asleep. Because the little toddler was tucked up against mom, she was super comfortable despite having so many eyes on her. That’s why photographer Laura Schaefer snapped images of the little girl strapped to the bride. These adorable pictures of the little girl strapped to the bride via her LilleBaby carrier quickly went viral online after the photographer uploaded them. And it’s no question why. The little girl is stunningly adorable. She’s beautiful and the moment is so special.

But people really took notice of the controversial images of the bride nursing her toddler while getting married. Because she had the baby strapped to her body while she was getting married, the little girl did what was natural – breastfeed. But the image sparked a lot of controversies – as well as a whole lot of admiration for what viewers saw in the pictures.

Mort and now-husband Jimmy Joe had Ellora when mom was a teenager. The little girl has been along for the ride ever since.

“She was with us when we moved out of our parents’ house into our first apartment, and then into our first house,” the mom said. “She has been there for our entire adult relationship. We have never had to make a major decision without having her in mind. She even went on our ‘honeymoon’ with us.”