When a bride realized she ran out of money and could no longer afford her reality-show worthy destination wedding, the woman decided there was only one answer to her plight – she had to ask her guests to pay. In a now-viral thread shared on Reddit, one outrage wedding guest shared how the Canadian bride demanded people pay between $1,000 and $1,500 to help her have her dream wedding in Aruba.

Instead of just downsizing the wedding or compromising on something else, the bride blamed her guests for not giving her the money she wanted. She revealed that since her friends and family would not “donate” large sums of money to her, she would just cancel the wedding. 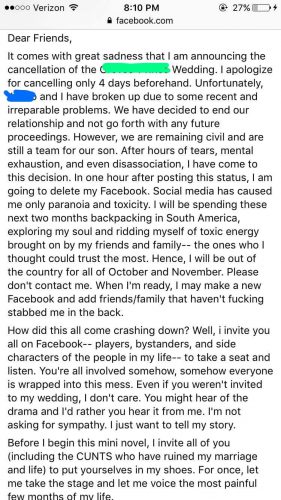 “Dear friends, it comes with great sadness that I am announcing the cancellation of the [name blanked out] wedding. I apologize for canceling only four days beforehand. Unfortunately, [name blanked out] and I have broken up due to some recent and irreparable problems,” she began.

At the beginning of the planning, the bride was told by the groom’s family that they would pay for the wedding. Her maid-of-honor had also offered to provide a large donation to the wedding. But their contributions were still not enough for her to get the wedding of her dreams. That’s when the Canadian bride had no choice but to beg her guests for the cash. 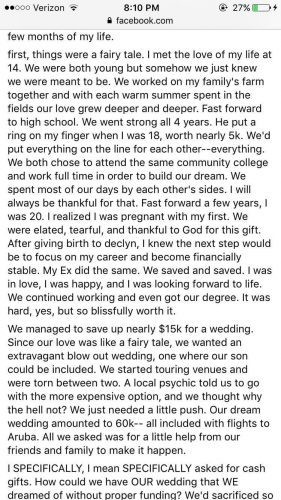 “My maid of honor (who shall not be named) pledged $5,000 along with her planning services. We tearfully thanked and accepted,” she said. “My ex’s family offered to contribute $3,000. So our request for $1500 for all other guests was not f*cking out of the ordinary. Like, we made it CLEAR. If you couldn’t contribute, you weren’t invited to our exclusive wedding. It’s a once in a lifetime party.”

Because people were not willing to pay large sums of cash so someone else could get married, guests started canceling and pulling out of the plan. This outraged the bride, who lashed out at her guests and even her groom, driving him to the point of desperation. 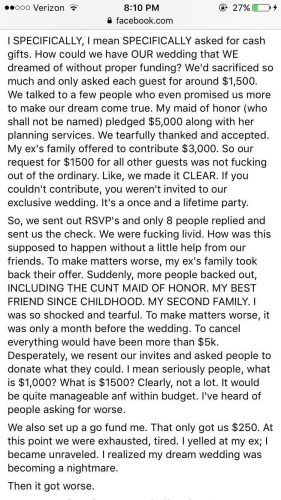 Because he wanted to marry her despite everything, the groom proposed something simpler than a destination wedding in Aruba.

“My ex came into the room and offered to get a vegas wedding done. I laughed in his face, but he was dead serious. He wanted those cheap, raggedy, filthy, wh*re-like Vegas weddings. I mean WHAT the f*ck??,” she fumed. 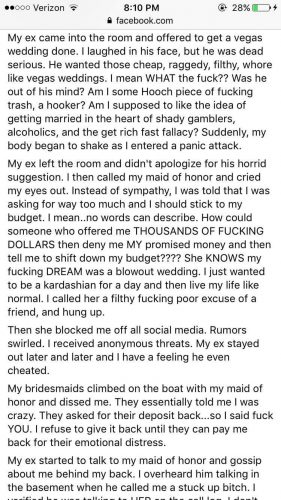 The maid-of-honor and her bridal party then disappointed the bridezilla even more. They pulled out of the event, withdrawing their pledged funds, and this meant the wedding plans imploded.

“Anyway. I am exhausted. I am bone tired. My heart is not the same. It is stone cold. Fragmented. Empty. I need to get away from this awful society. How hard would it to have been to fucking donate, friends? Do I matter to you? Just f*cking give me money for my wedding,” she said. 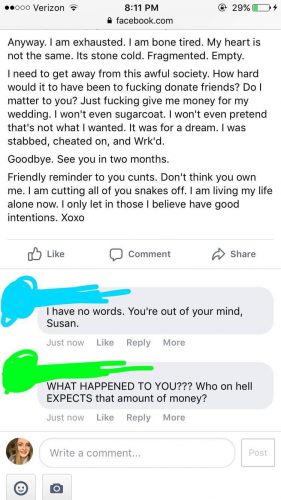 While the Canadian bride thought it was normal to beg guests to pay for the wedding, people on social media were horrified by her behavior.

What do you think about this bride?