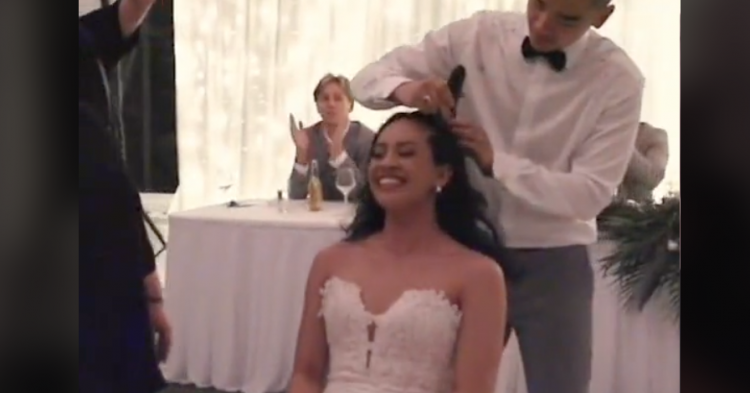 A pair of lovebirds decided to do something that utterly shocked the guests at their wedding reception. In front of dozens of people, the bride and groom took turns shaving each other’s heads with clippers. Although the act seems quite bizarre, the duo recorded it and uploaded the video to the Chinese-created TikTok app, revealing the heartwarming reason they decided to shave their heads in front of the guests at their wedding reception – and the truth is bringing people to the brink of tears.

Jony and her groom, Alistair, were the ones responsible for creating the brings-tears-to-my-eyes moment for millions of people to see on the social media platform. Because bride Jony Lee has a large following on the platform – and knows how to create a viral video – her clip of the newlyweds using clippers to shave each other bald went viral with more than 23.8 million views and counting. There were also more than 30,000 comments shared on the video. 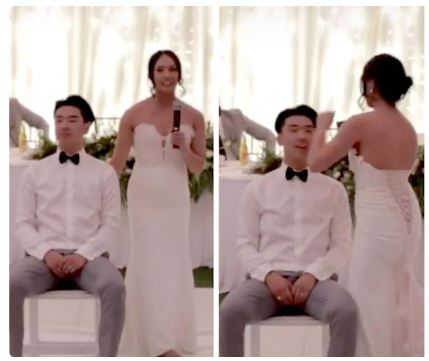 As Filipinos, many wedding guests expected Jony and Alistair to do the traditional “money dance.” This tradition is popular in the Philippines and occurs when the newlywed bride and groom dance around the reception hall as people stuff money into their clothes. Instead of doing the dance, the pair decided they would shave off their beautiful hair as a shocking surprise at their reception.

“If you do have any bit of cash on you, we are going to be shaving our heads for cancer,” the bride announced in a quivering voice. “Whatever money you lay in front of us, we will be donating it tonight.”

The pair wanted to donate the money to cancer research because Jony’s mother, Luna Macapagal, was diagnosed with stage IV ovarian cancer back in 2018 and was still battling the disease and going strong.

“For my warrior mum,” Jony wrote as the caption for the viral video. “In solidarity with those going through it.”

Luna had been willing to do everything and anything to beat cancer. She underwent treatments that ranged from chemotherapy to surgery and even radiation treatments. As a result of her grueling cancer treatments, the brave mother of the bride had lost her hair, which was why the bride and groom decided to shave their heads at the wedding reception to let mom know that she was loved and respected.

“I want to show her that even though she is going through this, I will always have her back and support her every step of the way,” Jony wrote on social media. “And it also helps me cope knowing that together we are strong! Love you so much, mommy!! #motherdaughterbond #cancerwarrior.”

Jony and Alistair decided to donate all of the money they received during their special wedding reception dance to cancer research in honor of Luna, who was currently undergoing treatment at a hospital in Manila. Jony wanted her mother to know that she would always be there for her and support her every step of the way, no matter what.

The lovebirds donated the money they received during their wedding reception to cancer research and treatment, but that wasn’t all: They also decided to cut off their hair in honor of Luna and other people who were going through various types of cancers.