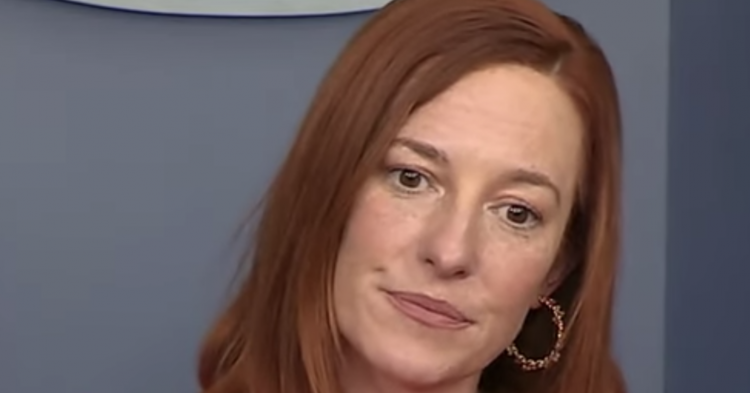 Although she has only been on the job for a few months, White House press secretary Jen Psaki has already solidified her legacy during her press briefings. Because Psaki has a “tell-it-like-it-is” style, she is not afraid to confront reports and call them out for rumors and bald-faced lies. During a Monday press briefing, Psaki deftly put down a loose attack attempted by a Newsmax reporter regarding President Joe Biden’s upcoming infrastructure plan.

Newsmax is a right-wing source that has been accused of pushing conspiracy theories that are not grounded in evidence. The reporter, John Gizzi, wanted to sow disinformation regarding Biden’s infrastructure plan and floated an idea that there was a “private memo” going around the White House and Washington that admitted that Biden’s $2 trillion plan would actually cost closer to a whopping $3 trillion.

According to the Newsmax employee, Biden’s secret memo was “circulated in the business community and to some Republican senators.”

Because Gizzi did not ask Psaki a question with his initial statement, he took a second stab at it, adding: “Somebody went through it, or is claiming to have gone through it, and added it up and came up with $1 trillion more than [what] the president listed as the price tag.”

Psaki did not bat an eye with her masterful response: “Sounds mysterious — the memo, the secret memo.” She then returned to the talking points on Biden’s infrastructure plan that have been spoken about in detail many times among many different news outlets.

“So I would encourage y’all to get your calculators out and charge that up and see how it compares to the secret memo,” Psaki added.

Twitter users applauded Psaki’s ability for “really mastering the art of maintaining calm professionalism while skewering the hell out of stupid questions.”

Another person wrote, “Best part is that it’s not mean or contemptuous. She really has the third-grade teacher vibe. Like you expect 8-year-olds to say crazy stuff, it’s not personal. You just redirect them to the task at hand and move on.”

In response to her calm takedown of Gizzi, one Twitter user wrote: “He just got Psaki-bombed, take out your calculators for the secret memo. She’s the best.”

Another person added, “Wow, I love the job she’s doing. If there was a better pick, I damned sure don’t know who it would be, based on the past couple of months.”

In a direct tag of the press secretary, one Twitter user told her to “Keep up the great work. Nice to see a competent Press Secretary for a change. I am a former GOP & think you are doing a great job w/ the crazy right-wing / (Q) wing press. Stay focused, stay honest. Thank you.”

However, some people miss the days of Trump’s final press secretary, Kayleigh Mcenany.

What do you think about Biden’s White House press secretary Jen Psaki?