All Americans Can Celebrate Now That Trump Signed This Bill Into Law : AWM 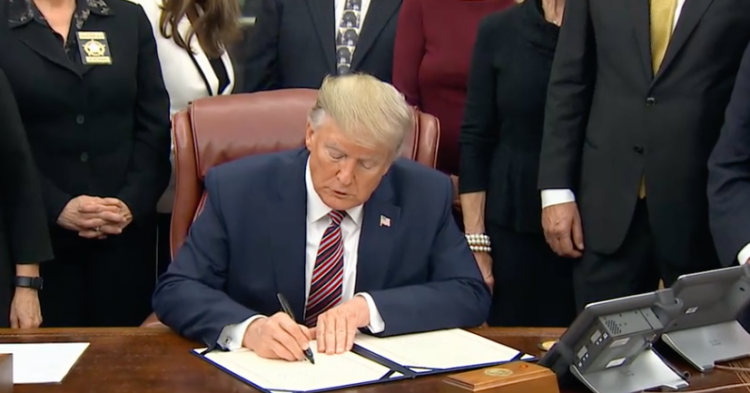 It’s been a long time coming, but President Trump has finally put his foot down for Americans when it comes to animal cruelty. In a landmark bill that will forever change the way the American justice system treats people who are cruel to animals, Trump signed into law a bipartisan bill called the Preventing Animal Cruelty and Torture (PACT) Act, which now turns animal cruelty charges into federal felonies.

While some states have gone easy on animal abusers and killers, charging them with minor misdemeanors, the new law will finally let those who commit animal cruelty know that America does not stand for people who do things like that. Those people will now be punished to the full extent of the law as is available to them for felonies.

Trump signed the landmark bill into law on Monday. The bill had very popular in Congress. The Senate passed the bill with unanimous support on November 5, 2019, after it had swiftly passed in the House of Representatives a few weeks before in October.

Few laws have been passed with the House and Senate split down Party lines. But what senator or member of Congress would be willing to stain their voting record with a no on a no-brainer like this anti-animal cruelty bill.

Americans love their animals, and this law only helps protect them from future violence and cruelty. Hopefully, it works and keeps more animals safe from the violent hands of people who mean harm to cute critters everywhere.

Republican Senator Pat Toomey of Pennsylvania said, “Passing this legislation is a major victory in the effort to stop animal cruelty and make our communities safer.”

Toomey made that statement earlier this month while pushing forward this pro-animal life bill.

Democratic Senator Richard Blumenthal of Connecticut also sponsored the bill alongside Senator Toomey. This bill was one of the few that got bipartisan support in today’s split government.

Toomey added, “Evidence shows that the deranged individuals who harm animals often move on to committing acts of violence against people. It is appropriate that the federal government has strong animal cruelty laws and penalties.”

Because the Trump administration has been dealing with an influx of violence and murder – including more mass shootings (domestic terrorism) on American soil than any other time in history – stopping people from getting violent is a possible way to help. If the PACT Act can lock up just one person, who would have taken their cruelty to animals and escalated it into a mass shooting or other violence toward humans than it was a success for everyone.

The bill was first introduced by Representative Ted Deutch, a Florida Democrat, and Representative Vern Buchanan, a Florida Republican. The bill is not wholly new but more of an expansion on the Obama-era 2010 Animal Crush Video Prohibition Act, which made it illegal to distribute and produce videos of “animal crushing,” which is as bad as it sounds.

What do you think about this new anti-animal cruelty law passed on Monday? Do you think it’s a win for America?