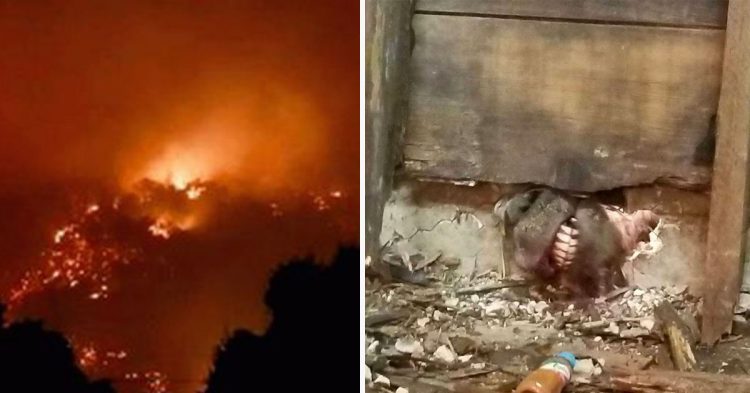 Wildfires have been devastating parts of the world more and more each year. Just like the influx of tornadoes in the Northeast, many claim that wildfires are increasing due to climate change. And few places are getting it as badly as California. In December 2017, wildfires were ravaging the western state, destroying huge swaths of land throughout Southern California. People and animals needed to evacuate the area quickly or risk getting stuck in the blaze and seriously injured.

Thankfully, most people were able to escape the flames and get to a safer location. But in Sylmar, California not everyone was able to get away before the wildfires struck. The victim in this story was a 23-year-old horse who was unable to escape the fire that devastated his home. 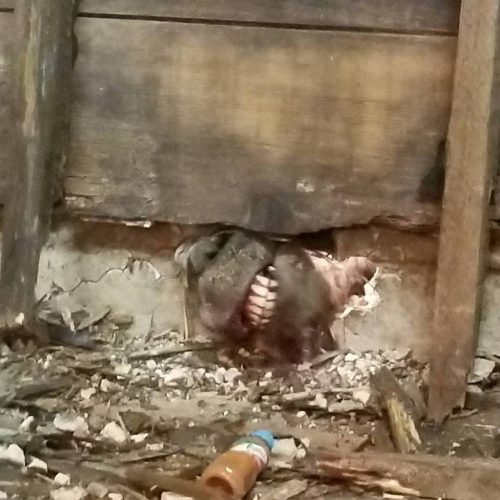 The steed’s name was Kenny. He ran from his stable but tripped when he got stuck in a crevice along the wall of the stable. From his vulnerable position, Kenny watched as the deadly flames came closer to him. Ever closer. And he had no way of getting out unless a brave soul risked their life to help.

Then a journalist named Gina Silva saw something dire. From a hole in the stable, she saw the whites of Kenny’s teeth. As you can see in the image, the horse was clenching his jaw and was suffering a lot.

Silva was part of the team at KTTV Fox News and had been sent out on the risky mission to cover the California wildfires. And as she strolled just beyond the reach of the flames, she noticed Kenny trapped alongside the stable. Silva was determined to help the trapped horse. She urged her team to try, but they did not have enough power to free the animal. They needed help – a lot of help. 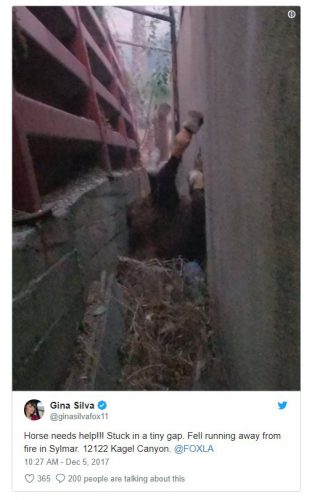 While firefighters usually would be happy to help such a struggling animal, they were obviously all occupied with a very important matter – the wildfires themselves.

That’s when Silva turned to social media with a plea, which she knew was a long shot. Most people have already fled the area and were not around to give Kenny a helping hand.

On Twitter, Silva wrote, “Horse needs help! Stuck in a tiny gap. Fell running away from fire in Sylmar.” Then she listed the address.

As if by magic, the tweet got enough attention to draw people to the area to help Kenny, the 23-year-old horse in need. 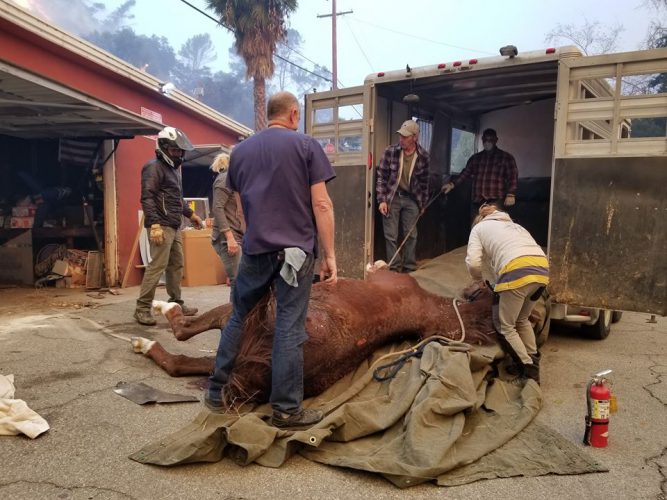 The rescuers knocked down the wall that kept him stuck. A veterinarian gave Kenny a shot of tranquilizer to keep him relaxed because the rescue was not going to be easy. Then the team of impromptu rescuers did what they could to free Kenny. And by the hand of God, they got the horse out of the crevice and to a safer place. Kenny would not fall victim to the flames after all.

Thankfully, Gina Silva noticed his white teeth among the debris and did what she could to save him. It made a big difference to Kenny.