A Farmer Buried 6,000 Chicks Alive, But Said He Has A Perfectly Good Reason : AWM

A Farmer Buried 6,000 Chicks Alive, But Said He Has A Perfectly Good Reason 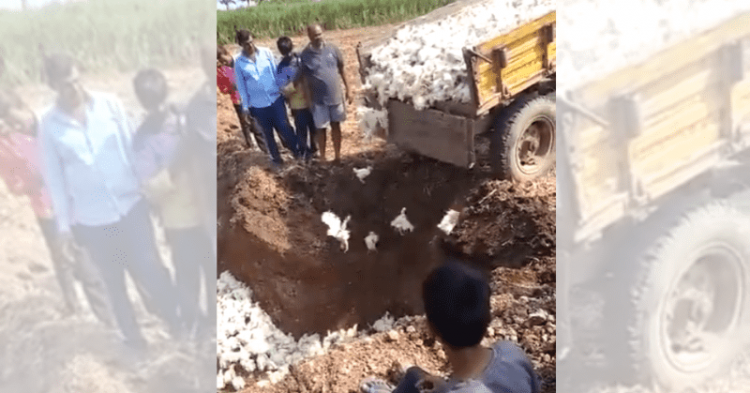 As the world tries to figure out more about COVID-19, misinformation seems to be spreading as quickly as the disease itself. One myth about coronavirus disease that has had a disastrous effect on farmers is that people thing the disease spreads from chickens. This unfounded fear has sent the poultry industry into fallout in Belagavi in India – and poultry farmers do not know what to do to recover from the problem.

Because the government has failed to help these farmers, one farmer from Gokak decided to bury as many as 6,000 live chickens because the market has dropped so steeply. Najeer Ahmed Makandar filmed the burial of the six thousand birds as a way to spread awareness around how COVID-19 has destroyed his livelihood. However, the fake news media has turned the video he filmed into an argument for the spread of COVID-19 through poultry.

Makandar loaded the birds onto the large truck and dumped them into the pit that he had dug at Nulsoor in Belagavi’s Gokak taluk on Monday.

“I was left with no option,” the 47-year-old farmer told TOI. “I have spent nearly Rs 6 lakh to rear these birds. Their food and medicine cost a lot.”

Chickens are usually sold when they’re between 42 and 45 days old. The ones this farmer was forced to dump were about a month old.

“Before the coronavirus scare, live chickens were selling at Rs 50 to 70 a kilo which was profitable. The prevailing price is Rs 5 to 10. A live chicken weighs up to 2.5 kilograms, which would give me a maximum of Rs 25 for a bird. I cannot sell at such a loss, nor can I maintain the birds.”

He decided to shoot the video of himself, dumping the chickens into the ditch to show people how dire the situation is for farmers. Despite the video, the government is not helping.

An industry expert weighed in and agreed that farmers are screwed by the coronavirus situation because of the spread of misinformation.

“Imagine the plight of farmers who are forced to sell birds for Rs 5 and Rs 10 a kilo. If this situation continues, many farmers may have to look for another livelihood.”

It is not just farmers like this man who are facing the destruction of their livelihood. Because of the government’s delayed attempt, farmers are very worried.

Madhukar Pawar works as a general manager of Quality Animal Feeds Private Limited, which produces tens of thousands of kilos of chicken every month. The economic destruction of their business has been profound.

“Chickens are being sold at Rs 5, and many live chicken trading companies are unable to pay farmers. My company has 1,500 employees, and more than 1,000 farmers are dependent on us. This month we have managed to pay them, but it will be difficult from next month,” Pawar said.

He added, “While farmers are suffering, meat traders are still selling chicken at Rs 70 and 120.”

Before long the global food economy could collapse – all because of the spread of misinformation. If the government does not respond to this problem soon, farmers could be out of a job – and then they won’t be able to put food on their family’s table.