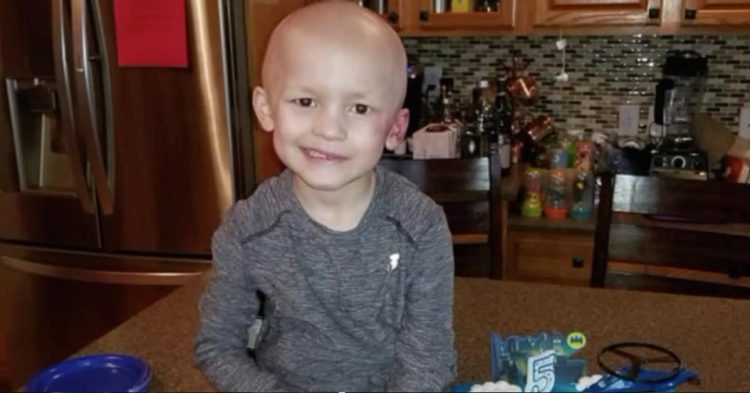 After getting every possible treatment, five-year-old Garrett’s doctors had to tell his parents the bad news. There was no hope for the little boy. His rare form of pancreatic cancer was going to take his life. His parents Ryan and Emilie Matthias had no choice but to watch and support their son for nine months while he battled and fought against the cancer that continued to eat away at his body despite the best cancer treatments money could buy.

On the day that the doctors had to tell Garrett’s parents the bad news, they were devastated. But through the entire ordeal, Garrett proved to be a champion. He never lost his sense of humor throughout the entire cancer-treatment process, which goes to show you just how powerful he was in his heart.

Throughout the ordeal, Garrett loved to play jokes and pranks on the doctors and nurses who were administering his life-saving treatment. Just because they were there to save his life and stop his cancer from spreading did not mean that they couldn’t do the work with a smile on their face. But more often than not, it was Garrett who made them laugh and smile when you’d think it would be the other way around.

When the family from Iowa learned that Garrett was not going to beat pancreatic cancer, they knew that they had to talk to their son about the reality of the situation. They did not want him passing away without knowing the truth – that the cancer was going to kill him. But since he was just five-years-old, they needed to approach the conversation carefully. They never explicitly told Garrett that he was going to pass away or that he would need to have a funeral, but they were able to extract his wishes by a simple hypothetical exercise.

Emilie told WHO-TV, “We had a lot of conversations around ‘When I die, I want to do this.'”

Despite it all, Garrett died in July 2018. It was a devastating loss for everyone who knew him.

When it came to the obituary, they channel Garrett as much as they could.

“We really tried to use his words, and the way that he talked,” Emilie said. “Garrett was a very unique individual. What I really didn’t want was for his obituary to be ordinary and to have a really sad funeral. We’ve cried oceans of tears for the last nine months.”

“The things I love the most: Playing with my sister, my blue bunny, thrash metal, Legos, my daycare friends, Batman and when they put me to sleep before they access my port. Things I hate: Pants!, dirty stupid cancer when they access my port, needles, and the monkey nose that smells like cherry farts…I do like the mint monkey nose like at Mayo Radiation and that one guy that helped me build Legos (Randy).”

What do you think about this boy’s obituary?